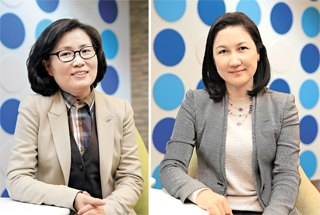 There’s more “women power” at Lotte Mart than at any other company in the industry, the company said Sunday.

Decision makers from the beginning of the whole retail process to the end - product selection, marketing, consumer management and on-site sales - are women. 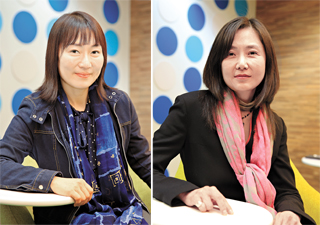 The idea is that of 53-year-old Lotte Mart CEO Kim Jong-in, who was looking for a unique way to grow sales and profits. While most hypermarkets compete by opening more stores or slashing prices, Kim felt he could bring the level of competition to a new level and ultimately outperform E-Mart and Homeplus.

“It’s true that we weren’t concerned enough about the major customers of our stores, which are women in their 30s and 40s,” Kim said. “By having women in charge at our company, we will transform from a place people go to for cheaper food products to a place where all sorts of things related to a more enjoyable life await shoppers.”

The women executives hold a brainstorming session twice a month, dubbed Women’s Pick Cafe, a speedy discussion that deal with more than 10 topics at a time. Conclusions reached at the meeting are implemented in all stores.

Here are the kind of ideas they come up with: 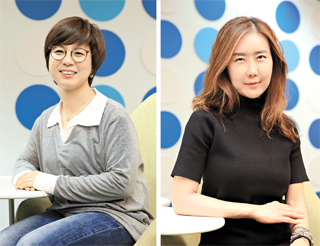 Han (Home furnishing) - “When we publish product information on flyers, we should focus on showing actual ‘scenes’ rather than the product itself, so that customers can associate the advertisement with their own homes. Let’s show them a dinner table with food than showing them the food itself.”

Kim (Marketing) - “When we visited neighbors 10 years ago, we used to bring canned tuna or ham products, but now we bring aromatic candles, wine or flowers. We have to bring that change in custom into our mart as well.”

Seo (Merchandising innovation) - “What people want these days is not a luxury lifestyle but rather, a cool one. That means the supermarket has to carry a more diversified set of products.”

Song (Babies and kids) - “For busy working moms, we opened an online version of Toys ‘R’ Us, and in the future, there will be more multibrand shops for men, because these days, men are very lonely.”

Kim (Sales) - “When I was a store manager, I created separate rest areas for men, and they were really popular. Let’s listen to what employees are having difficulty with and figure out solutions.”

Jeong (Human resources) - “A leader that works with the passion of a mother can change corporate culture. If more suggestions are conveyed from the bottom up, customer service can only get better.” 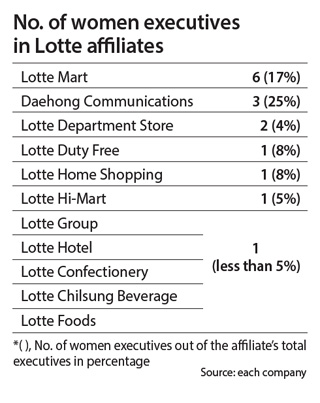 The change to a more women-centered management at Lotte Mart is only three months old, but the impact is already visible. The biggest change is how products are arranged in the store. The layout is transforming as specialized brands are clustered together. Room by Home (home interior shop), Yorihada (home meal solution), Toys ‘R’ Us and Pet Garden (pet shop) are examples of such clusters.

Even in the fresh food areas, which are pretty much the same at all hypermarkets, Lotte Mart is using lighting to differentiate product displays.

The flow of people is also being improved in stores. Displays are raised to a height of 30 to 60 centimeters (1 to 2 feet) so customers don’t have to bend over.

Following suggestions that too much information disturbs customers’ shopping, various advertisements that once filled the walls have been cleared out.

The Yangdeok branch of Lotte Mart in South Gyeongsang, which opened last December and implemented all the listed changes described above, actually saw 40 percent more revenue in home furnishing and 47 percent in fashion accessories through February compared to the Guro branch in Seoul, which is of a similar size.

Stores in Gunsan, Pangyo and Yeongjong Island have all jumped in sales by 10 to 20 percent year on year after remodeling.