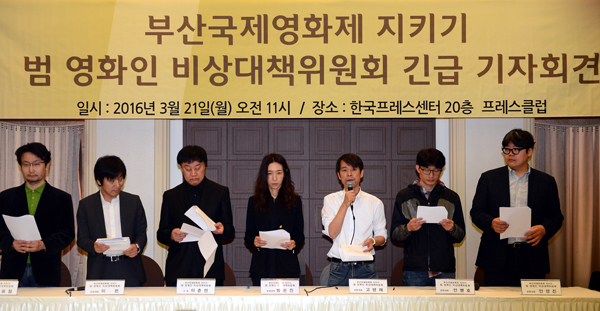 The Korean Film Group’s Emergency Committee for Defending BIFF’s Independence issues a statement on Monday, expressing their determination to boycott the upcoming festival if no concrete revisions are made to its articles of association by Busan Mayor Suh Byung-soo to ensure the festival’s independence and freedom of speech. [NEWSIS]

Korean cineastes said Monday they will boycott the upcoming 21st Busan International Film Festival (BIFF), scheduled for Oct. 6, unless the Busan city mayor, Suh Byung-soo, makes concrete revisions to its articles of association to safeguard freedom of speech at the festival.

“We don’t want to imagine a situation where serious film enthusiasts stop attending BIFF,” the statement read. “However, if Busan officials continue to lord over the festival, simply because the city provides financial support, while also insulting our efforts at reconciliation by calling such efforts a ‘toxic intervention by outside forces,’ then we have no reason to set foot in the festival.”

The emergency committee’s statement follows Suh’s refusal to hold an extraordinary general meeting last month, which was supposed to decide the future path of now-dismissed festival leader Lee Yong-kwan and discuss the details of how Suh is going to keep his word, which he gave when resigning on Feb. 18, that he would amend the articles of association to better ensure artistic freedom at the festival.

Suh also recently disapproved of the festival’s newly appointed 68 advisory committee members, saying they are “unqualified Lee supporters.” He further made a legal case of the dispute by filing an injunction to suspend their member rights, although no court decision has been reached at this time.

“What is happening to BIFF isn’t just a one-time event, but a chronic issue involving the suppression of the types of films we indie filmmakers can make,” said Goh Young-jae, director at the Association of Korean Independent Film & Video and a representative of the independent cinema distributor Indie Plug.

“That’s why we cannot help but be sensitive about this issue. This film festival was the only venue where we could meet the audience in an environment of free expression,” he added.

“What we can definitely say for now is that we aren’t going to participate in anything related to Busan Mayor Suh and attempts to intrude upon our freedom of expression. However, we are going to actively participate in campaigns to protect the festival’s integrity.”

Lee Choon-yeon, a veteran filmmaker in Korea who is also an adviser of the emergency committee, also expressed his frustration regarding the current conflict.

“As a senior member of the Korean film scene, I was always the one persuading people in the industry to wait and watch until the festival and the city could resolve the case between themselves, but I don’t have any justifiable reason to persuade them to do that anymore,” Lee said.

“The city of Busan is suffocating our efforts, claiming that unqualified people are taking over the festival, thus alienating us from the city and its citizens. Frankly speaking, we have nothing to gain from ‘taking over’ the festival. We love this event. That’s all. It’s a meeting place where we can come together with friends, old and new, once a year. We aren’t abandoning the festival, but pleading, out of desperate hope, that we might find a way to save it in the end.”

BIFF and Busan, the host city that finances more than half the festival’s budget, have been at odds since 2014 when Lee, the festival’s director at the time, went ahead with screening the politically controversial film “The Truth Shall Not Sink with Sewol,” despite a city order to remove it from the lineup.

The city has been pressuring Lee to resign ever since. Lee refused, but when his three-year term came to an end this February, Suh did not reappoint him to the position.

In addition, Suh stepped down from his own position as the festival’s chairman, which had been automatically delegated to Busan’s mayor since the festival’s inception in 1996.

Saying he does not want to be misunderstood for intervening with the festival’s independence, Suh said the position will be handled by the private sector from now on. But no further details have been given about the matter.