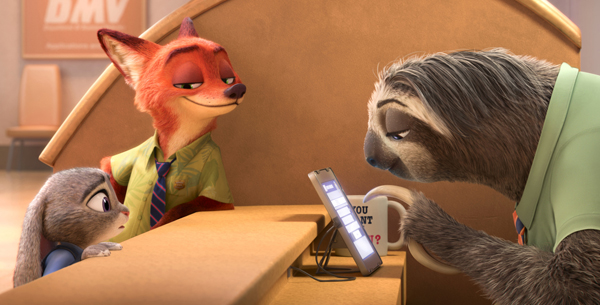 “Zootopia” continues to run wild over its rivals in both Korean and North American box offices, despite not being a recent release.

In its third weekend in North American theaters, the animated Disney feature outpaced “Allegiant,” the third film in the “Divergent” series.

Featuring the voices of Jason Bateman and Ginnifer Goodwin, “Zootopia” earned $38 million in the U.S. box office this weekend, retaking first place with a total of $201.8 million, according to comScore estimates Sunday.

The kooky yet clever animated feature, featuring the exploits of an anthropomorphic rabbit police officer who teams up with a fox con artist, maintained its No. 1 spot in Korea for the second week in a row, notwithstanding the fact that it was released five weeks ago. “Zootopia” has now been seen by nearly three million moviegoers in Korea, drawing in roughly 21.9 billion won ($18.8 million).

In second place was the action-thriller “London Has Fallen,” starring Gerard Butler, which attracted 191,807 audience members over the weekend.

The third box office spot was locked down by Cho Jung-lae’s independent film “Spirits’ Homecoming,” which sold 151,633 tickets domestically in its fourth weekend. The film, about former Japanese military sex slaves, has so far been seen by 3.4 million theatergoers and is now making the international rounds.

After making an official release in the United States, England and Canada on March 11, Waw Pictures, the film’s distributor, said it is also looking forward to releasing the film in New Zealand and Australia by the end of this month.

Given the competition, new releases failed to receive much attention this weekend.

And the spy film “Spooks: The Greater Good,” starring Kit Harington, barely made it into the top 10, opening with some 25,000 filmgoers.