DPRK talks loud, and too much

DPRK talks loud, and too much 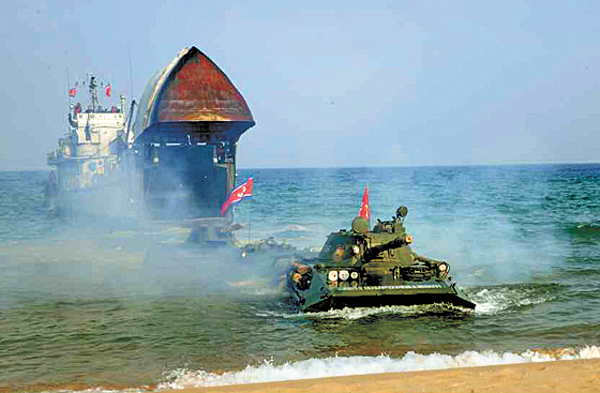 Left: On Sunday, Rodong Sinmun released a photo of landing and amphibious ships.

North Korean leader Kim Jong-un continues to crow about his country’s nuclear weapons and amphibious landing ship, but in doing so he has effectively shown his hand, experts say. 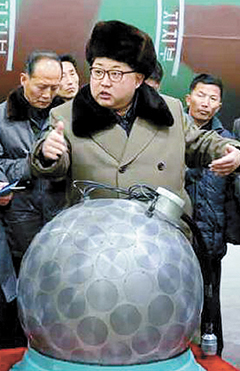 Meanwhile, Rodong Sinmun, the official newspaper of the North’s ruling Workers’ Party, and several other state news agencies, are extensively reporting on the young leader Kim’s activities. In the past few weeks, Kim claimed the North is now in possession of atmospheric re-entry technology for its intercontinental ballistic missiles, miniaturized nuclear warheads and hydrogen bombs.

Rodong Sinmun released a report Sunday, along with photos, describing Kim’s management of landing and anti-landing exercises of the North’s Korean People’s Army (KPA). The report also listed the events participants: 2nd Air Division of KPA Air and Anti-Air Force, artillery sub-units of the 7th Corps and forces of 108th Motorized Infantry Division of the KPA.

“It was first time North Korea disclosed video images of tanks pouring out the front of an amphibious landing ship,” said Yang Uk, senior research fellow at the Korea Defense and Security Forum.

The 33-year-old Kim, who took office in December 2011 after his father Kim Jong-il died, has occasionally unveiled North Korean weapons to the media.

South Korea and the United States have been hugely dependent on satellite images and signals to monitor North Korea’s weapons system and nuclear test attempts, as well as intelligence gathered by personal contact, or HUMINT (human intelligence). However, thanks to the North Korean leader’s strutting, the two governments have been able to more accurately identify the nation’s military capabilities.