Self-nomination stirs a revolt in the Minjoo Party

Self-nomination stirs a revolt in the Minjoo Party 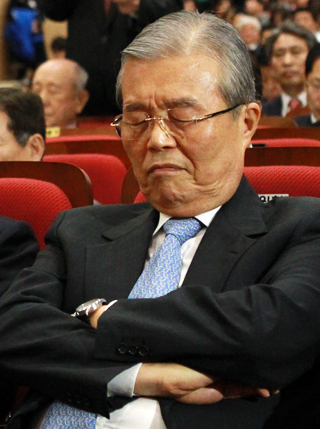 The largest opposition party was plunged into turmoil on Monday, as its interim head attempted to award himself a proportional representative seat in next month’s general election and the leadership tried to talk him out of it.

Kim Chong-in, acting chairman of the Minjoo Party of Korea, announced Sunday a roster of proportional representation candidates for the April 13 general election. Three groups of 10 candidates were announced. Park Kyung-mi, a professor of mathematics education at Hongik University, was the first candidate in Group A. Kim gave himself the second place in the group.

In Korea’s general elections, voters cast two ballots - one to elect a lawmaker for his or her constituency, and the other to vote for a political party. The latter votes decide proportional representatives for each party. In the upcoming election, 47 out of the 300-member National Assembly will be proportional representatives. Parties win the seats depending on the proportion of total votes they win in the election.

The Minjoo Party allowed Kim to decide the ranks of three candidates on the lists. In addition to the mathematician and himself, Kim placed Choi Woon-youl, an economics professor at Sogang University, at No. 6 in Group A.

Criticism immediately arose over his decision to practically award himself a National Assembly seat. Jung Jang-sun, the campaign planning manager, started a boycott on Sunday of any campaign operations to protest Kim’s decision.

Finalizing a list of proportional representative candidates requires a confirmation by the party’s central committee, and no such endorsement was made on the roaster Sunday evening. The committee is formed by 487 Minjoo Party members, including sitting lawmakers and regional chapter heads.

After his Sunday announcement faced resistance, Kim said he will stop working on the campaign. Instead of attending an emergency leadership meeting Monday morning, Kim headed to his private office.

He did not hide his rage when he spoke exclusively to the JoongAng Ilbo on Monday morning. “If the party insults my character as if I was a greedy old man for nominating myself, I won’t tolerate it,” Kim said. “I have no intention of working for a political party that treats me in such a nasty manner.”

Kim said it was necessary for him to stay in the National Assembly to help the Minjoo Party win the next presidential election. He also denied speculation that he has presidential ambitions, saying, “That is laughable.”

Kim, 75, joined the Minjoo Party in January at the invitation of Moon Jae-in, then the party’s chairman. Moon recruited the architect of President Park Geun-hye’s economic pledges in the 2012 campaign in order to reinvent the struggling opposition party ahead of the April general election.

Later that month, Moon relinquished all his authority, including any power over nominations, to Kim.

Since then, Kim has made a series of bold nomination decisions and eliminated political heavyweights labeled loyalists of the late President Roh Moo-hyun. He also pushed forward a strategy of fielding new faces to freshen the party’s image while dropping established old-guard members.

“Their protest is not based on their desire to win the general election,” Kim said. “They must speak more honestly. The key is that my nominees do not fit their identity, and they are merely giving disguised excuses.”

Kim also said he had long anticipated the resistance of the former activists, adding, “Finally, it came.”

The emergency leadership, including Rep. Lee Jong-kul, the floor leader, created a compromise plan on Monday. In the proposal, the leadership adjusted Kim’s proportional candidate ranking from No. 2 to 14. Former Air Force Chief of Staff Park Jong-heon, whose son was involved in a corruption scandal, was eliminated from the roster.

The leadership also scrapped Kim’s strategy of three groups. It said the central committee will vote on the candidates and create a new order. The leadership led by Kim will have the right to designate the rankings of seven candidates.

Kim was displeased. “It was created without consulting me, and I will say what I have to say when the time comes,” Kim told reporters in the afternoon as he was continuing talks with the leadership. Some media reported that he wouldn’t accept the No. 14 rank and would stop serving as the Minjoo Party’s interim leader.

If Kim rejects the compromise proposal and steps down, the party will lose its leader only 23 days before the general election. The central committee was originally to meet at 3 p.m. on Monday, but delayed the meeting to 5 p.m. and then again to 8 p.m.

A close aide to Moon Jae-in told the JoongAng Ilbo that Kim was trying to redefine the image of the Minjoo Party by placing moderate and conservative candidates in the top rankings of the proportional representative list, and he can understand the intention.

“It is regretful that some candidates were nominated, though their flaws could be easily found by simple Internet searches,” he said. “But the attempt to find a new color for the party through proportional representative selection is clearly a winning strategy. The party must submit to the chairman’s nomination authority.”

He also said Moon, if he were the leader, would have shown respect to Kim, such as allowing him the No. 2 position on the candidate list. “But Kim’s awarding the nomination to himself invited misunderstanding,” he said.

When Moon recruited Kim as the campaign chief, he offered a proportional representative spot to Kim as a part of a strategy to expand the party’s supporters to moderates and conservatives.

Asked in previous weeks if he would run as a proportional representative, Kim replied ambiguously.