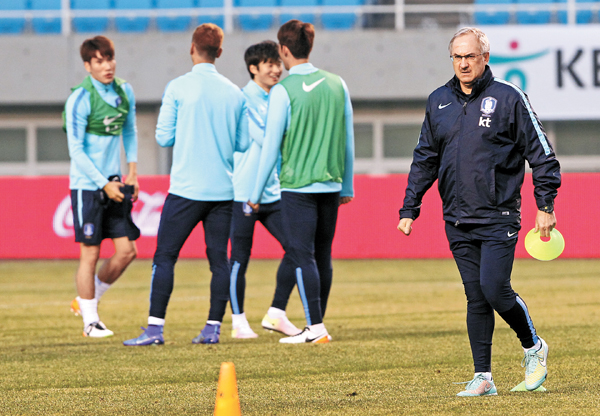 South Korean national football team manager Uli Stielike, right, at team practice on Monday. The team will play Lebanon on Thursday in the second round of regional qualifiers for the 2018 World Cup.[ILGAN SPORTS]

The South Korean team had a solid year in 2015, playing in 20 international matches, winning 16 of them, losing three and tying one.

Most importantly, in those 20 games, the team only conceded four goals, an astonishing statistic of 0.2 goals on average given up per game, the lowest among the 209 teams in FIFA last year.

Granted, the South Korean team mostly played against lower ranking teams from Asia but it is undoubtedly among the top defensive teams in the world. The bottom line is the 61-year-old German manager wants his players to continue to play strong in defense.

The team’s first international match of this year is against Lebanon tomorrow at Ansan Wa Stadium, a second round match for 2018 FIFA World Cup qualification. After Thursday’s game, South Korea is slated to play the Thai national team in a friendly match on Sunday in Bangkok, Thailand. Twenty three players in the national team roster announced by Stielike on Mar. 15 gathered on Monday at Ansan to train for both matches.

In the seventh match of the second round against Lebanon tomorrow, South Korea hopes to prevail yet again without forfeiting any goals, matching the team’s record of seven straight shutout games. When South Korea travelled to Lebanon in September 2015, it crushed Lebanon 3-0.

South Korea’s match against Thailand on Sunday is also expected to end in victory.

Key defenders from last year including Kim Young-gwon of Guangzhou Evergrande, Kwak Tae-hwi of Al-Hilal, and Jang Hyun-soo of Guangzhou R&F are at full strength in the defensive lineup, which is also bolstered by Hong Jeong-ho of FC Augsburg of Bundesliga. Although English Premier League Tottenham Hotspur’s Son Heung-min will be absent from upcoming games, national team captain Ki Sung-yueng of Swansea City will oversee the team on the pitch. Lee Jeong-hyeop of Ulsan Hyundai FC and Suk Hyun-jun of FC Porto are expected to add weight to the team’s offensive strength.

The national team’s Olympic manager Shin Tae-yong also considers defense to be the central point of the team’s success in Rio. The national team, composed of players under 23-years-old, grabbed its ticket to Rio in the summer after placing second in the 2016 Asian Football Confederation (AFC) U-23 Championship in Qatar in January. The U-23 team also reported to Paju National Football Center on Monday to prepare for two friendly matches against Algeria on March 25 and 28.

The emphasis on defense comes after the team’s performance in Qatar, especially in the final match against Japan. South Korea initially led the match 2-0 after Kwon Chang-hoon and Jin Seong-wook scored in the 20th and 47th minute respectively. However, South Korea conceded two back-to-back goals to tie the match at 2-2, and finally lost to a finisher in the 81st minute. Coming out of the devastating loss, Shin is determined to not repeat the same failure.

Shin’s first move to buttress the team’s defense is to exclude central defender Yeon Jei-min of Suwon Samsung Bluewings who performed poorly in Qatar from the roster. Instead, Hong Jung-woon of Daegu FC joined the squad. Jeong Seung-hyun of Ulsan is expected to assume a more important role in defense as well.

With defense in capable hands, strikers such as Kwon Chang-hoon of Suwon, Moon Chang-jin of Pohang Steelers and Ryu Seung-woo of Arminia Bielefeld in the Bundesliga should have more opportunity to score. Park In-hyeok of FSV Frankfurt and Choi Kyoung-rok of FC St. Pauli will be new additions in offense.