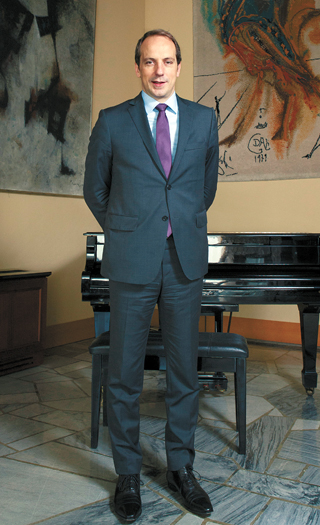 The France-Korea Year began this week and will run through December, with over 300 events in Seoul and other cities throughout Korea. Some of the upcoming events include an exhibition by the French photographer Francoise Huguier, opening on March 23, a visit by France’s newly appointed foreign minister, Jean-Marc Ayrault, from March 23 to 25, and a concert by the French rock star M, a.k.a. Matthieu Chedid, on March 24.

Ties between France and Korea date back to 1836, with the arrival of the first French missionary to Korea, Father Philippe Maubant, and in 1886, the two nations established official relations with the signing of the Treaty of Friendship, Commerce and Navigation. Japan’s 1906 invasion of Korea led to a 40-year interruption of diplomatic relations, but when the Korean War broke out, France sent 3,200 troops to support the South as part of the U.N. Command, 270 of whom died.

Penone also pointed to French Tech Hub Seoul, an initiative launched on Saturday that he believes will encourage French and Korean startups to work together in creating “a dynamic ecosystem,” adding that this will be an exciting year for collaboration on technologies such as e-health and autonomous vehicles. Korea JoongAng Daily sat down with him to discuss some of these possibilities.

Q. Our two countries’ relationship dates back 130 years to the Treaty of Friendship, Commerce and Navigation. What’s the significance of this treaty and how have bilateral relations developed since that time?

A.The history of French-Korean relations dates back to 1886 and is very dense, based on shared memory and common heritage. Let me give you two examples. First, on the basis of this Treaty of Friendship and Commerce, France sent to Korea in 1887 its first official representative, Mr. Victor Collin de Plancy, and an interpreter, Mr. Maurice Courant. The latter is considered the father of Korean studies in France. As a second example, during the Korean War, France sent 3,200 soldiers who fought in the United Nations coalition. France has always been close to Korea. Our bilateral relations have developed tremendously since then.

There also has been closer political cooperation recently.

Our political dialogue has been raised to a higher level since the launch of the France-Korea Year in September 2015. The Action Plan that was adopted during the state visit of the President of the French Republic Francois Hollande [to Korea] in November last year will serve as a roadmap for our relations in 2016 and beyond. This Action Plan covers the following priorities: strengthening our dialogue on international and global issues; developing our security and defense cooperation; diversifying our economic relations, especially in creative industries, focusing on future-oriented technologies and start-ups, but also in promising sectors like tourism, and sharing sports and gastronomical cultures; strengthening university cooperation, student mobility and vocational training; and promoting exchanges between regions and cities. Let me also remind you that the French president invited President Park Geun-hye for a state visit in 2016.

What is the significance of the “Year of France in Korea” and what are your expectations of the outcome of this year?

First, we want to present new talents and creators as well as aspects of French culture that are less well-known in Korea. Second, we would like to show France in its diversity and provide information to Koreans about French companies, universities, regions and cities. Finally, the France-Korea Year provides us with a unique opportunity to initiate long-term projects between our two countries and people.

Have you heard feedback on how the “Year of Korea in France,” which launched last September, is going?

The Korean events in France are very high-quality events and are very successful. The French public will, until August, have the fortunate opportunity to explore Korean culture. I myself had the chance to attend the presentation of the “Jongmyo Jeryeak [royal ancestral ritual music]” on September 2015 at the National Theater of Chaillot. It was the opening event of the France-Korea Year. I also visited the exhibition “Korea Now!” in the Musee des Arts Decoratifs in Paris, and I was delighted.

The Year of Korea in France is still ongoing, and there are plenty of events for French people to enjoy. For instance, Korea is the guest of honor of the Paris Book Fair this week, and many Koreans writers and publishers have made the trip to Paris to participate in the event.

Do you foresee a growth in trade or dealings between our two countries because of the 130th anniversary?

Definitely. The 130th anniversary and the France-Korea Year will contribute to energized exchanges between our countries, especially at the economic level. Economic forums and workshops will serve as a venue for dialogue between French and Korean companies. We hope that this increased visibility and new connections will generate more trade and investment between our countries in the years to come.