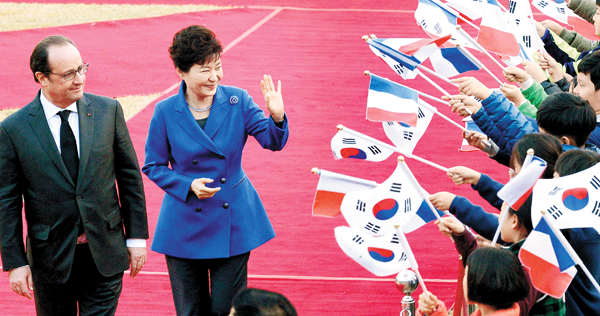 French President Francois Hollande, left, and President Park Geun-hye, right, are welcomed by Korean children at the Blue House in Seoul ahead of their bilateral summit meeting on Nov. 4, 2015.[JOINT PRESS CORPS]

The Year of Korea in France, celebrating 130 years of bilateral ties this year, kicked off with an inaugural ceremony at the Palais de Chaillot in Paris on Sept. 18 last year, during Korean Prime Minister Hwang Kyo-ahn’s official four-day visit to France.

The “Annee France-Coree 2015-2016,” or France-Korea Year, was agreed upon during President Park Geun-hye’s state visit to France in November 2013, with over 300 events planned by the two countries’ governments.

The Year of France in Korea will run through December, involving a slew of cultural, food, educational, fashion, business, science and educational events. 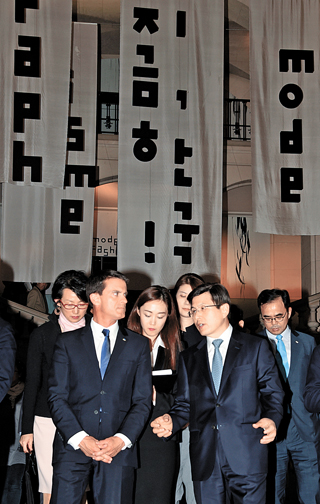 French Prime Minister Manual Valls, left, and Prime Minister Hwang Kyo-ahn, right, kick off the “Korea Now” exhibit of design, crafts, fashion and graphic design at the Decorative Arts Museum in Paris. The two countries launched the Year of Korea in France on Sept. 18 and will begin the Year of France in Korea on Wednesday.[KOREA PRIME MINISTER'S OFFICE]

Economic ties on an upward trend

Official bilateral ties between the two countries date back to June 4, 1886, when France and Korea signed a Treaty of Friendship, Commerce, and Navigation. Since then, the total volume of trade between the two countries has exploded, reaching 8 billion Euros ($8.9 billion) in 2015 - a 50 percent increase over the past decade, according to the French Embassy in Korea. The boost is in part due to the Korea-EU free trade agreement, which was implemented in 2011.

“In the 1970s and 1980s, the French cultural center was actually a popular dating place for Korean couples, who would go to watch foreign films or stroll through an exhibit,” said Anthony Chaumuzeau, director of the Institut Francais in Seoul.

“Now, more and more people in the French community have become more interested in your country over the last 10 to 15 years,” he continued. “It’s not Japan anymore, it’s really now about Korea as trendsetters in the region, with K-pop, Korean dramas and our shared sense of romance. People are always interested in what you’re up to next, and they want to learn more about your country.”

There are about currently 4,000 French nationals living in Korea.

“A lot of French young people are very attracted by Korea and would like to study in Seoul or have their first professional experience there,” said Ambassador of France Fabien Penone. “The number of French students learning Korean is increasing very fast.” He emphasized that this year serves as an opportunity to “develop people-to-people exchanges.” 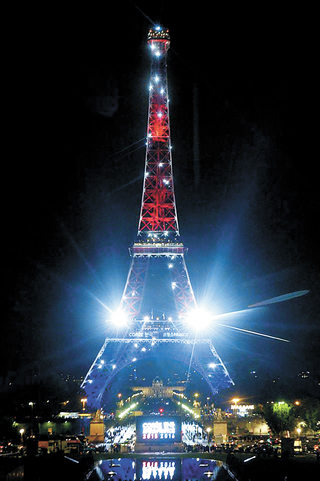 The Eiffel Tower is lit to reflect the colors of the Korean flag to mark the launch of the 2015-2016 France-Korea Year last year.

There are 1,000 French students now studying in Korea and 6,500 Korean students in France, according to the embassy.

“French-Korean economic relations are on an upward trend,” Penone added. “A big advantage of French companies in Korea is their historical presence and growing diversity.”

Choi Kwang-jin, director of the Korean Foreign Ministry’s Public Diplomacy Division, said, “This is the first time we’ve spent a whole year on celebrating an anniversary of diplomatic ties between two countries.”

The organizers of the Korea-France Year include the Korean Ministry of Foreign Affairs, the Ministry of Culture, Sports and Tourism, the Korean Culture and Information Service (Kocis), and Korea Arts Management Service (KAMS), Institut Francais and the French Embassy.

Henri Loyrette, former director of the Louvre Museum, and Cho Yang-ho, chairman of Hanjin Group, which runs Korean Air, were named in 2014 as the heads of the joint organizing commission preparing for the 130th anniversary events.

In France, a taste of both traditional and modern Korea has been introduced, including a performance of royal ancestral music, Jongmyo Jeryeak, a Techno Parade in the streets of Paris and the ‘‘Korea Now’’ design, crafts, fashion and graphic design exhibit. The Year of Korea in France runs through August.

“Currently, there are some 350 registered events, so that amounts to nearly an event a day. And we’re still receiving applications,” Choi added. “The most important aspect of our two countries’ bilateral ties is, of course, economics, but also it extends to culture, students exchanges and other opportunities for public diplomacy.” 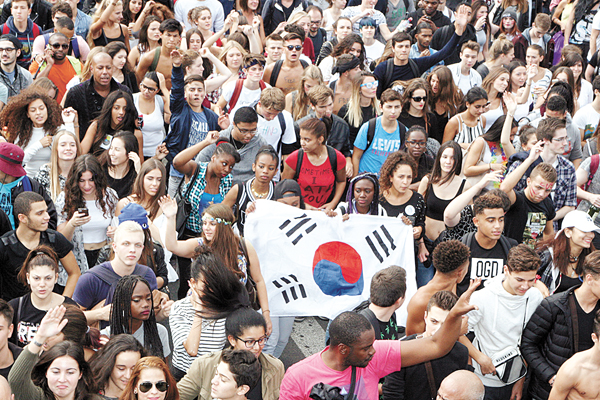 Events galore for everyone

Parisians make headlines for their fashion, and French designer Jean Paul Gaultier, on his first visit to Korea, will see the launch of his exhibition at the Dongdaemun Design Plaza in central Seoul this week.

“I love the mixing of culture, and in the exhibition - there is one dress which is inspired by the traditional Korean costume. But I did it my way,” Gaultier, known for innovative designs such as Madonna’s conical bra, told Korea JoongAng Daily Saturday. His visit to Korea will coincide with Seoul Fashion Week.

“This is the final exhibition, and I am honored that it coincides with the 130th anniversary of Korea-France ties,” the former creative director of Hermes said at a reception at the French ambassador’s residence.

This is the 13th and last stop of his popular exhibition, which began in Quebec seven years ago. It opens this Saturday and runs through June.

The upcoming year will showcase diverse aspects of France’s culture, including the famous architect Dominique Perrault, who designed Ewha Womans University campus, and the works of photographer Francoise Huguier, whose has done work in South Africa, Russia and Cambodia.

French cuisine - both gourmet dishes and street food, will be highlighted this week, starting with the “Good France” worldwide annual event Monday, involving over 1,500 restaurants worldwide, including those in Seoul, Busan and Sejong City.

The gastronomical events run through Saturday and are expected to appeal to experts and casual foodies alike. Some events will even reach out to the public through street food stalls at Gwanghwamun Square in Seoul.

Also on Wednesday, the innovative dance performance “Shigane Nai” will be performed by French choreographer Jose Montalvo and the National Dance Company at the National Theater of Korea.

The French Tech Hub Seoul, a platform bringing French startups and innovative Korean companies together, starts Thursday. This initiative dates back to 2013, and the Seoul hub is the sixth of its kind globally, which includes locations in New York, Tel Aviv and Moscow.

The Korea-France Leaders Forum is to be held on Thursday at the Hotel Shilla and will be attended by some 150 opinion leaders including the conference chair Jacques Attali, a French economist and former adviser to President Francois Mitterrand.

Foreign Minister Ayrault will also hold a strategic dialogue with his Korean counterpart. Korea is the first Asian country Ayrault will visit since he became foreign minister in February.

For students, the Korea Study Abroad Fair takes place at Bexco in Busan, also on Thursday, and on Saturday and Sunday in Seoul’s COEX Mall.