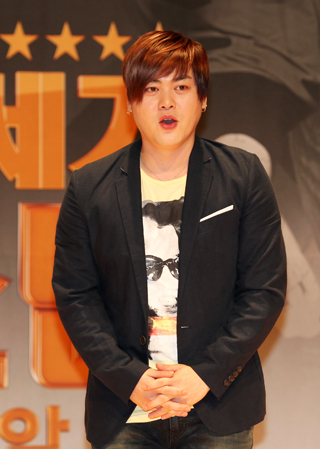 Moon Hee-jun, formerly of the K-pop boy group H.O.T, is planning to hold a concert celebrating his 20th anniversary this weekend.

According to the concert management company, the singer will unveil a portion of the song “Media” (2002), which was withheld due to censorship rules.

At the time of the song’s release, Moon left out a portion of the lyrics that were labeled socially controversial. The lyrics were reportedly in part criticizing the media for being manipulative.

“Having been singing for 20 years, I still fail to see anything has changed,” the singer explained about his decision to reveal the controversial lyrics.

Pointing to the recent mega-hit drama series “Signal” as the impetus for his decision, Moon added, “Although the lyrics of one song won’t do much to change the world, I believe musicians should be allowed a platform on which they can share messages directed at society.”

Moon, both in his time as a member of H.O.T and in his solo days, has brought up social issues including abuse at school, war, suicide and drug use.