Foreign financiers are urged to grow in Korea

Foreign financiers are urged to grow in Korea 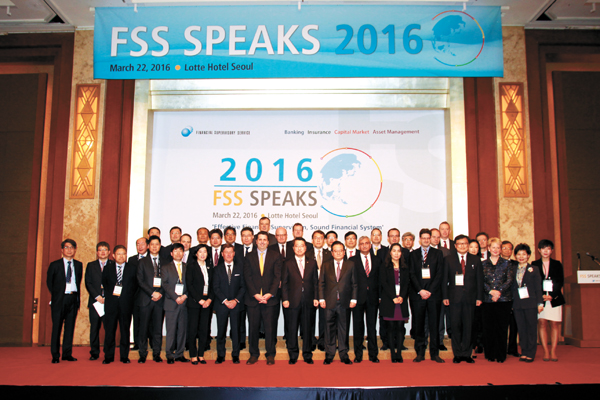 U.S. Ambassador to Seoul Mark Lippert, sixth from left in front row, Financial Supervisory Service (FSS) Gov. Zhin Woong-seob, seventh from left, and Executive Vice President of the Bank of China Gao YingXin, next to Zhin, pose before the beginning of the FSS’ annual forum. [NEWSIS]

Zhin Woong-seob, governor of the Financial Supervisory Service, appealed on Tuesday to leaders of foreign financial institutions to find new growth in the Korean market.

At the 2016 FSS Speaks, an annual forum hosted by the financial watchdog in central Seoul, Zhin cited a handful of growth engines in the financial market, which are core parts of the government’s financial reform plans.

“We are actively encouraging fintech, Internet banking, and other promising areas as a new growth engine for the financial industry,” he said in a keynote speech. “We are also providing support to promising technology companies as a way to further stimulate interactions between the financial sector and the real economy.”

About 260 leaders and executives of foreign financial firms operating in Seoul, as well as ambassadors to Korea and senior diplomats, participated in the event to hear the financial watchdog’s policy directions.

The governor emphasized how much Korean financial authorities are concerned with technology companies whose collaboration with financial institutions is crucial to determine the future of the industry.

The Korean government is now strongly seeking growth in the fintech sector, where IT-savvy start-ups might develop innovative financial products in cooperation with financial institutions, when regulations are sufficiently eased.

“The Korean government is doing its part by undertaking bold measures to reform and re-energize the economy and put it back on the growth track,” Zhin said.

The FSS governor said his agency came up with its own measures to make reforms in the area of financial supervision in line with the government’s direction.

“The reform measures we put into effect also helped us bring about a new supervisory approach that gives the market fresh freedoms and power to realize its full potential,” he said.

The governor also asked the foreign financiers to join the government’s efforts towards financial reforms. “Foreign institutions have a variety of strengths and know-how on operating innovative products such as derivatives, credit rating models and risks management methods,” he said. “We hope you utilize those capabilities to take advantage of finding new growth engines in the Korean market.”