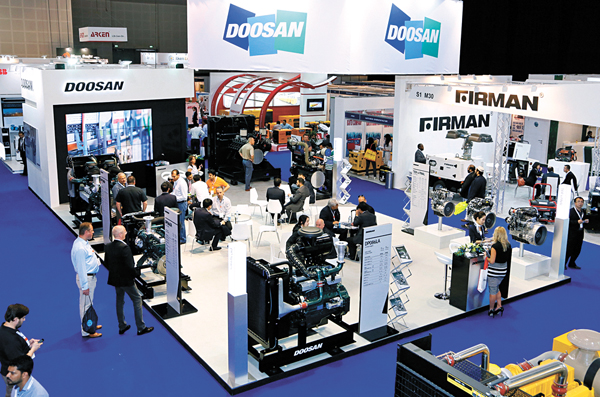 The world is changing rapidly, and all businesses are bound to face challenges as a result. But according to Doosan, it’s how those challenges are met that determines a company’s success.

Recording orders of over 580 billion won ($500.7 million) in its first year, Doosan’s fuel cell industry - its new growth engine - seems to have found its feet. The building, housing and industrial segments of the global fuel cell market, in which Doosan has proprietary technology, are expected to expand to 38 trillion won by 2023. With an annual growth rate of 30 percent, they account for 90 percent of the global fuel cell market. Furthermore, the Korean government’s renewable energy portfolio standard (RPS) has provided Doosan with a stable base from which to secure contracts. The RPS imposes mandatory new regenerative energy development rates to power generators with a capacity of 500 megawatts or above.

Sales and operating profit for Doosan Heavy Industries & Construction will likely climb this year. Sales are expected to show a near 10 percent increase from last year, while operating profit is expected to surge by 78.7 percent, counting profits from overseas subsidiaries. Doosan Heavy Industries saw a decrease in operating profit from 2012 to 2013 as it avoided small-value orders. However, it is expected to see significant growth this year, recovering from its low point in 2013 with a steady rise in its order backlog. In late 2015, Doosan Heavy Industries reported an order backlog of 18 trillion won. Its goals for this year’s total contract value is estimated to be 30 percent higher, at 11.4 trillion won, due to projects carried over from the previous year and good prospects for nuclear facility projects and markets in Africa and Iran.

Predicting that developing countries will continue placing new construction orders despite the global recession, Doosan Heavy Industries & Construction plans to use a regional differentiation strategy. Doosan has also set its eyes on Iran, a lucrative market expected to place between $140 billion and $150 billion worth of orders in social overhead capital this year. Doosan intends to enter the Iranian market through its most competitive industries: power generation and water plants.

Doosan Infracore participated in the Middle East Electricity Exhibition (MEE) held in Dubai, United Arab Emirates, from March 1 to 3. The largest energy expo in the Middle East, MEE received over 50,000 visitors and 1,500 exhibitors from 126 countries.

At the trade fair, Doosan Infracore showcased eight engines, including its DP series engines, G2 series compact diesel engines and small industrial engines. It invited 100 global dealers and manufacturers to a conference for the purpose of introducing new products and strengthening partnerships.

Last year, Doosan Infracore struck deals worth 100 billion won during MME 2015. It hopes to surpass that figure this year.