‘Shunning politics, I dedicate myself to shared growth’

‘Shunning politics, I dedicate myself to shared growth’ 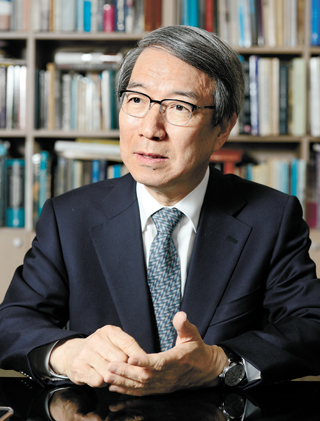 Chung Un-chan, former prime minister and economist, declared earlier this month that he would not get into politics, rejecting attempts by the main and minor opposition parties to woo him.
His announcement came ahead of the April general election, as the Minjoo Party of Korea and the People’s Party have tried to persuade Chung, a native of South Chungcheong and well-known former Seoul National University president, to join them.
Chung, however, said in a recent interview with the JoongAng Ilbo at his office near Seoul National University that he will continue to concentrate on spreading the concept of “shared growth,” an agenda between large and small companies, that he pushed during the former Lee Myung-bak administration.

Q. Why did you decide not to go into politics?
A. I was considering whether it would be effective to go to the National Assembly in a bid to realize my lifelong work of “shared growth.” At the time, the Minjoo Party and People’s Party asked me to join their parties, and that gave me a mind for politics for a while. However, then I thought that while joining politics might be effective, the field lacks sincerity. In addition to that, choosing between the two parties was difficult, given each party’s situation. The Minjoo Party was caught up in controversy with its pro-Roh faction [allies of the late President Roh Moo-hyun], which has seized control in the party. A number of people also defected from the party, blaming former leader Moon Jae-in’s opinionated leadership.
And it was against my common sense that some in the People’s Party conceded to the main opposition party’s offer to collaborate, despite the fact that the party was created in less than a month. The current situation in politics is far from ideal. The other reason I avoided politics is that [the party] spread rumors about things that never happened and made decisions according to that. This also offended my sense of reason.

Are you referring to an article by the Minjoo Party that said “former Prime Minister Chung to join party?”
That’s another story. Political factions misled the media, and the media reported speculative stories. Since it was so absurd, I couldn’t even respond.

Did you notify the Minjoo Party or the People’s Party before releasing the statement?
My consistent stance was that I would work at Yeouido [in the National Assembly] if it helps shared growth. However, I decided not to enter politics for the reasons given above. Instead, I met leaders from both parties and explained myself.

Did the two parties ask you to join several times?
Yes, they did, several times. Minjoo lawmaker Park Young-seon visited my office. Kim Young-hwan, a lawmaker for the People’s Party, also gave it his best shot.

What were their reasons for trying so hard?
My interest was how I could be helpful to the country if I joined the party. However, they did not talk about that. Rep. Park Young-seon said pushing shared growth in the parliament would be more effective than putting it aside. However, I didn’t choose the Minjoo Party because that could have lead to an identity crisis. When I was appointed to be prime minister in 2009, liberal lawmakers lashed out at me at the hearing with false accusations. They fiercely refused when I pushed for a plan to make Sejong City a city of science and enterprise. So I thought it would be hard for me to work at the Minjoo Party, since those lawmakers are still in the party.

Did the People’s Party leader, Ahn Cheol-soo, come to you and suggest the offer?
I met him in town several times. I could feel his sincerity. He said, “Let’s work together for new politics and a multi-party system,” adding that his idea of “fair growth” and my ideology of “shared growth” are similar.

Do you agree?
The two economic ideas are similar, but shared growth is a broader notion.

Is your idea similar to the “economic democracy” that Minjoo Party leader Kim Chong-in is pushing?
Ahn’s idea is to change unfair trade into fair trade, abolishing conglomerates’ harsh price-cutting on deliveries and technology extortion. It includes a consolation match, giving opportunities to businessman who failed to establish venture companies. Kim’s economic democracy is, in short, chaebol (conglomerate) reform, narrowing the gap between conglomerates and small and medium-size enterprises (SMEs). However, my shared growth idea is much broader. Big companies and SMEs, the rich and poor, employers and employees, Seoul, and local regions, men, women, South Korea and North Korea, should all hold hands together, growing the pie and sharing it fairly.

Do you think Kim or Ahn will push for their economy plans if they take presidential office?
Well, I’m not saying that they won’t push for economic democracy or fair growth. But, I think the necessary political environment is absent.

You’ve been seen as a presidential candidate but you decided to step away from politics.
I have never thought about it [being president]. For me, what I do is more important than what I become. I prefer to lead the Korea Institute for Shared Growth, rather than be president and not accomplish my goals.

What are the requirements for the next president?
The world is focused on shared growth. Countries are concerned about bipolarization. We need a leader with a philosophy of shared growth who will push hard to make it happen.

How bad a situation is Korea’s bipolarization?
In Korea, the top 1 percent takes 13 percent of total income, and the top 10 percent takes 43 percent. It’s clearly unfair compared to Japan and Europe. In the United States, the super rich, such as Warren Buffett, donate huge amounts of money and anti-Wall Street protests have vanished. It’s regretful we’re not following such trends. If we don’t, our society will collapse. But thankfully, our society has improved since the shared growth campaign. Big companies’ imperious style of cutting prices has been moderated. I’m not pessimistic