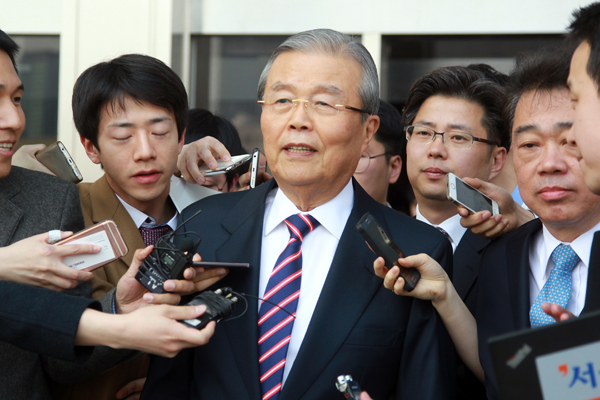 Kim Chong-in, interim leader of the main opposition Minjoo Party of Korea, walks out of the National Assembly on Tuesday after an emergency leadership meeting.[NEWSIS]

The Minjoo Party of Korea’s bold attempt to reinvent itself before the April 13 general election faced a crisis just three weeks before the poll, as speculation grew that Kim Chong-in, the interim leader of the party and the campaign chief, would resign. His awarding of nominations to candidates - and to himself - were challenged by hard-liners, and Kim stopped working on the campaign since Monday.

Kim ended his boycott after meeting with former Chairman Moon, the man who recruited him into the Minjoo Party. Kim then attended an emergency leadership meeting Tuesday afternoon.

According to Kim Sung-soo, the spokesman of the party, the 75-year-old interim leader made no mention of his resignation at the meeting. 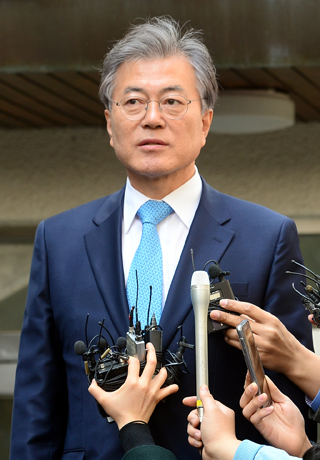 “I will take a little more time to think,” Kim Chong-in was quoted as saying by the spokesman.

The power struggle began Sunday when Kim announced a roster of proportional representation candidates and the central committee of the party refused to endorse it. Kim included himself at the top of the list, practically awarding himself a lawmaker seat. At the same time, left-leaning former student activists received few nominations.

Enraged by the committee’s resistance, Kim told media on Monday that he wouldn’t let the party insult him as a “greedy old man” for nominating himself. The committee, however, went ahead and created a new list early Tuesday morning.

The central committee of the Minjoo Party has the power to amend party regulations and decide the ranking of proposed proportional representatives. Candidates with higher ranks are more likely to get seats.

The committee is largely composed of former student activists, hard-line liberals and loyalists to the late President Roh Moo-hyun. It has been a strong backer of Moon, the former chairman and leader of the Roh faction.

Moon, who was staying at his home in Yangsan, South Gyeongsang, after handing over his power to Kim, rushed to Seoul and met with Kim on Tuesday. The meeting, which took place at Kim’s residence in Gugi-dong, central Seoul, lasted about 45 minutes.

“Kim worked tirelessly and selflessly to transform the party so that it will have the ability to win the next presidential election,” Moon said. “But his pride was hurt because his proportional nomination decision was criticized as being greedy.”

Admitting that the party disappointed him, Moon said he asked Kim to stay on and complete the campaign, or else his efforts so far will be in vain. “I invited him because the party was in crisis,” Moon said. “He did great work to reinvent the party, and we should show respect to him.”

Moon also said Kim must become a lawmaker to continue leading the party to win the presidential election. “The party, however, failed to see this, and I needed to explain it more, so I came here,” Moon said.

Moon recruited Kim, the architect of President Park Geun-hye’s economic policy in her 2012 campaign, in January to reinvent the party and fight the general election. Kim accepted Moon’s invitation, but made clear that he would have exclusive control over the campaign.

On Jan. 27, Moon stepped down from the chairmanship and relinquished all power to Kim. Kim launched an emergency leadership with six senior politicians. On Feb. 12, Kim officially became the interim chairman of the Minjoo Party.

One month after taking the chairmanship, Kim vowed drastic reforms. He said nomination rules would be changed to reinvent the party. He, however, faced resistance once he started wielding the power to award nominations. Kim made a series of bold decisions and eliminated political heavyweights labeled Roh loyalists and former student activists. He also pushed forward a strategy of fielding new individuals to freshen the party’s image.

The power struggle reached a peak when the central committee held a meeting late Monday night to defy Kim’s proportional nomination decisions. A vote took place early Tuesday morning and the committee created a new list based on the votes.

The committee gave Kim the right to decide four candidates and their rankings. The remaining ranks were decided by the vote outcome. Moon associates ended up being ranked high on the list, clearly reflecting the former chairman’s influence over the central committee.

Kim Hyun-kwon, a former student activist, received the most votes. He is also the husband of Lim Mi-ae, who worked on the reform council under Moon’s leadership.

Lee Cheol-hee, a political strategist, and Lee Soo-hyuck, former chief negotiator for the six-party nuclear talks, were ranked second and third. Both Lees were recruited by Moon.

Lee Jae-jeong, a former secretary general of the Lawyers for Democracy, was ranked fourth. Moon Mi-ok, a planning and policy director of the Centre for Women in Science, Engineering and Technology, and Kwon Mi-hyuk, a director of the Foundation for Broadcast Culture, were ranked fifth and seventh, and they were both Moon recruits.

While Moon associates ended up with top ranks, nominees that Kim had earlier favored were pushed to the bottom ranks.

Kim expressed disgust. “They already decided the order and cast ballots based on it,” he told the JoongAng Ilbo. “All I can do is laugh.”

A Kim aide told the JoongAng Ilbo that the hegemony of the Roh faction is deeply rooted in the party. “The hard-line Roh loyalists are still failing to come to their senses,” he said.

Although Kim worked hard to give the party a new image by ending the Roh faction’s control, the central committee clearly stabbed him in the back, another Kim associate said.

“Kim’s goal was transforming the base of the party and arming it with policies so that it could win a presidential election,” Rep. Woo Sang-ho said.

Moon and his associates defended Kim.

“If we want to become an alternative force to the ruling Saenuri Party, we must appeal to all voters except for reactionary conservatives,” a two-term lawmaker and Moon ally said. “The Minjoo Party is now heavily loaded with former student activists who are now established political forces.”

“Unless the party’s predisposition - being controlled by former student activists - is changed,” another Moon associate said, “we cannot win the general election.”

“Kim only spent 50 days with the Minjoo Party, but the progressive hegemonists controlled the party for more than a decade since the 2004 general election,” said Han Jung-hoon, a professor of political science at Seoul National University. “Even if the Minjoo Party managed to mend the rupture this time, it will resurface after the general election.”