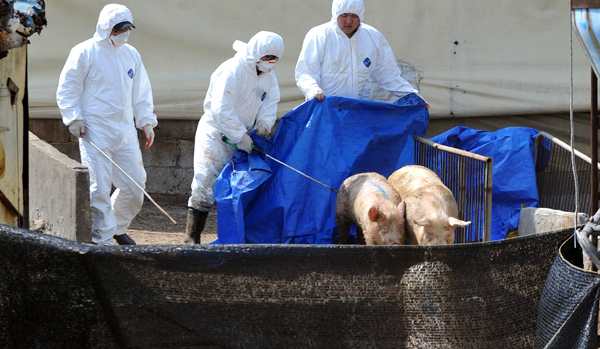 Pigs are being culled Tuesday in Hongseong County, South Chungcheong, after a pig infected with foot-and-mouth disease was found in the county Monday. Hongseong is the hub of the pork industry in Korea.[KIM SEONG-TAE]

Truck after truck loaded with large containers speed down the road leading to Kim’s farm, passing the signboard that reads “Emergency Prevention.” An excavator stands in the field nearby, digging graves while authorities erect black sheets to hide the site from passersby. Here, the fatal viral infection known as foot-and-mouth disease, infecting cloven-hoofed animals such as cattle, sheep and pigs, was identified Monday in a pig in Hongseong County, South Chungcheong.

The entry of foot-and-mouth disease, or FMD, into Hongseong is particularly alarming, as the county is the heart of Korea’s pork industry, breeding some 530,000 pigs at 315 farms and accounting for one-fourth of all pigs bred in South Chungcheong. As a result, the 69-year-old Kim, whose livelihood depends on these pigs, was forced to kill some 1,200 pigs on Tuesday.

This is the latest in an epidemic that has already struck North Jeolla in January, followed by Cheonan, Gongju and Nonsan, South Chungcheong, in February.

The Livestock Health Control Association, a public institute affiliated with the Ministry of Agriculture, Food and Rural Affairs, quarantined everything within a 3 kilometer (1.86 miles) radius of Kim’s farm, which includes 71 pig farms and some 122,000 pigs.

The association plans to vaccinate roughly 1.1 million pigs in South Chungcheong by Wednesday. It will then examine the antibody formation rate in vaccinated pigs on 838 farms by April 24.

Extermination methods for infected livestock in Korea often involve live burial or incineration. Livestock that isn’t yet infected is often buried alive together with infected livestock as a preventive measure. Critics have called these methods inhumane and challenged whether they are truly an efficacious means of eradicating diseases, since hasty and incautious burials may give rise to secondary infections via groundwater contamination.

As if in response to such concerns, An Hee-jung, governor of South Chungcheong, told Yonhap News Agency Tuesday that within his province only infected pigs will be culled.

“I have proposed to the Ministry of Agriculture, Food and Rural Affairs a policy that would allow FMD-infected farms to cull only infected pigs, and I have received a positive response from the ministry,” An said. “As Korea prioritizes vaccination over culling, partial culling only seems right.”

Many farm owners in Hongseong are understandably frustrated.

“I’ve vaccinated my pigs, but I’m afraid the disease may spread anyway,” said a 57-year-old farmer whose pig farm isn’t far from Kim’s.

However, An’s vaccination plan may not be sufficient by itself. Indeed, the infected pig at Kim’s farm had already been vaccinated, but it contracted a strain not covered by the vaccination. Like other RNA viruses, FMD has an incredibly high mutation rate, making it almost impossible to vaccinate for all possible strains.