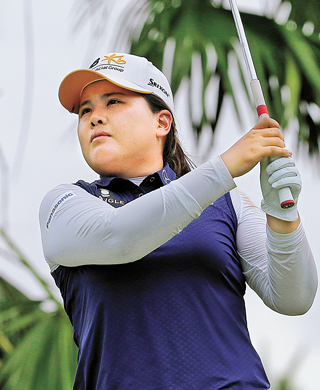 Although Park In-bee, world No.2 female golfer, had a slow start to the season, she hopes to refresh her determination before the ANA Inspiration to stay on course for the Summer Olympics in Rio de Janeiro.[AP/NEWSIS]

South Korean veteran golfer Park In-bee is in search of inspiration to make it to the Olympic Games in Rio.

“I never knew the lack of motivation can be as stressful as it is right now,” said the world No.2 golfer after missing the cut in the second round during the JTBC Founders Cup from March 18 to 21.

Although she marked 3-under in the second round, her 1-over par in the first round forced her to exit early from the tournament. This was the first time Park has not made the cut because of poor performance in an LPGA event since the Walmart NW Arkansas Championship in June 2015.

Park has had a rough start to the season. She withdrew from the Pure Silk Bahamas Classic in January due to a back injury. Technically, her exit from the Classic counts as a missed cut based on LPGA rules. This means she had two cuts this season already.

Adding to the stress, Park’s father-in-law passed away while she was in rehab from the back injury. “My back is almost healed,” said Park. “But I haven’t recovered 100% yet. My shots and putting are not as good as they used to be. What’s more aggravating is that I have a hard time concentrating out in the field.”

Park is not known for a strong start. In fact, she often begins each season sluggishly. Since her debut in 2007, she has been listed in the top 10 in 80 different events. However, she was listed in the top 10 only 11 times before the ANA Inspiration Championships that takes place in April.

Park won the Women’s British Open last year to win four different majors and capture her career Grand Slam. She is the first South Korean female golfer to capture the title. She also received the Vare Trophy at the end of last year, putting her on the threshold to be inducted to the LPGA Hall of Fame. However, after the glittering season in 2015, Park was left with a dilemma; she no longer had a clear career goal.

Park said, “I began to ponder my next career goal after 2015. Prior to last year, I thought once I achieve all the career goals I set for myself, I would be free from the pressure and be able to enjoy the sport. But it is becoming more apparent to me that the lack of a goal and motivation can be so stressful”

Park hopes to turn things around next week at the KIA classic before the ANA Inspiration in April. Seven out of Park’s 17 LPGA career wins come from major championships, which consist of ANA Inspiration, Women’s PGA Championship, U.S. Women’s Open, Women’s British Open and the Evian Championship. Because of this, Park is considered especially steady in big events.

“I am the type of person who devotes herself aggressively once there is a set goal,” said Park. “I think I will be able to control my mind once the major events come around.”

Her goal this season is the Olympics. When asked about her desire to qualify for the Olympics, she said, “I already won several major championships, so naturally my motivation going into those events would not be so adamant. But I cannot help become curious about playing in the Olympics since I have no experience in that regard. Also, this is the first time golf will be played as an official Olympic sport in 112 years. I have been discussing with Dr. Cho Soo-kyung, my psychological coach to find a new goal and motivation.”

After resting for a day on Saturday, Park travelled to Aviara Golf Club in Carlsbad, California, the venue for KIA Classic. Her parents will also make a visit to the location and Park expects the week to be a memorable one. “I am a little worn out physically as well as mentally after all the drama early in the season,” commented Park. “But I will refresh my mind before the ANA Inspiration. The quality of my shots could improve depending on my mentality.”