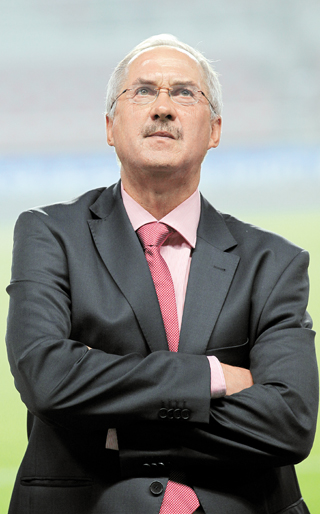 After a successful 2015, South Korean national football team manager Uli Stielike is determined and confident going into the first international match of the year today against Lebanon

The national football team convened Monday at Ansan Wa Stadium for their first official training session. The team will play at the venue against Lebanon in the second round of regional qualifiers for 2018 Russia World Cup today. It is then scheduled to play the Thai national team in Bangkok, Thailand on Sunday. The World Cup qualifier match against Kuwait that was originally slated for March 29 was cancelled due to a complication between FIFA and the Kuwait Football Association. By winning the match against Lebanon and Thailand without giving up any goals, the team hopes to set a new national team record with eight straight shutout games. The current record stands at seven consecutive shutout victories, which was set in 1978 and repeated in 1989.

The following is taken from a press conference with Stielike on Monday before the team’s first practice.

Q. This is the first international match of the year. Are you prepared?

A. This is the first international match since November of last year. The coaching staff has been preparing with passion and expects good results. The team might not be so motivated considering it already grabbed the top seed in the second round. However, thinking about the result from last year, having one game slip away from our hands could render everything we have accomplished so far pointless. So we will concentrate on our preparation.

What is your focus in the upcoming match?

I would like to see how the players who are non-starters in their respective teams perform through the match. They have a chance now and I will closely watch how they play.

Lee Jeong-hyeop of Ulsan Hyundai FC joined the team again. What do you expect from him?

We as a team move according to our own principles. If you look at Lee’s early career, he went from an unknown player to join the national team and put out a brilliant effort in the Asian Cup. However, an unintended injury halted him from remaining on the national team for a while. It is just the right thing to do to give a second chance to a devoted and well-performed player. Although Lee only scored two goals at his club, I hope he takes advantage of this opportunity to improve his performance this season.

Is there anything you want from your strikers?

What I am about to say is not only limited to the attackers, but it applies to everyone. Our defense begins from the top. Up until now, we have played solid defense and our strikers always contributed to the effort. This is how we forfeited no goals in the past several games. I want to see a play where our attack starts from the back. If we merely send the ball forward from the back, it would be a difficult game for us. The team as whole must move systematically.

How would you evaluate the performance by Suk Hyun-jun of FC Porto?

For Suk, transferring to FC Porto was a chance for growth. FC Porto is globally renowned club. He is fighting for a starting position in the club and has seen decent amount of playing time. He also puts out good plays when he is out on the pitch.

Was there any difficulty coming up with strategy for the upcoming games with all the injuries among the players?

There were some definite changes to my strategy. Kim Chang-soo of Jeonbuk Hyundai Motors replacing Oh Jae-suk of Gamba Osaka did not change our tactic since they play the same position. However, Ji Dong-won of FC Augsburg was included in the roster to play on the flank and it was central midfielder Ju Se-jong of FC Seoul that joined the team in his stead. I think we will have to use Koo Ja-cheol of Augsburg or Nam Tae-hee of Lekhwiya in place for Ji as side attacker.

The team is about to set a new national team record in the number of shutout games in a row. What are your thoughts on that?

I hope this kind of news continues to appear in the media so that the players can see it. If you look at the different groups in the World Cup qualifiers so far, Qatar has won all of its games and Japan has forfeited no goals. But we are the only ones who have the perfect record, winning all of our games without conceding any goals. We will prepare ourselves to continue this pace.

If the match against Lebanon was as paramount as the final match of the World Cup qualifiers that determine the team’s spot in the World Cup, would you have composed the lineup all the same?

The K-League started less than a month ago, so there was not enough of a chance for me to compare other K-League players with the current roster. We have about two months before players convene for the next time. I will watch the K-League closely until then to find suitable talent but at the moment, there was not enough time to do so. Even if it was absolutely necessary for us to beat Lebanon, I would have convened the same players. They had a solid year in 2015.