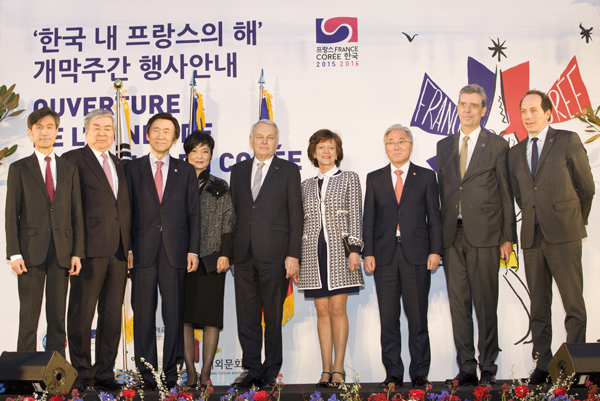 The “Year of France in Korea,” marking the 130th anniversary of bilateral ties between the two countries, kicks off with an inaugural ceremony at the Hotel Shilla in central Seoul on Wednesday, launching over 300 cultural, economic, political, science and innovation, and educational events that will take place through December. From left: Mo Chul-min, the Korean ambassador to France; Cho Yang-ho, chairman of Hanjin Group, which runs Korean Air, and co-chair of the joint organizing commission preparing for the 2015-16 France-Korea Year; Korean Foreign Affairs Minister Yun Byung-se and his spouse; French Foreign Affairs Minister Jean-Marc Ayrault and his spouse; Kim Jong-deok, Korean minister of culture; Henri Loyrette, former president of the Louvre Museum and co-chair of the joint preparatory commission; and Fabien Penone, the French ambassador to Korea. The two governments launched the “Year of Korea in France” last September, which runs through August.[PARK SANG-MOON]