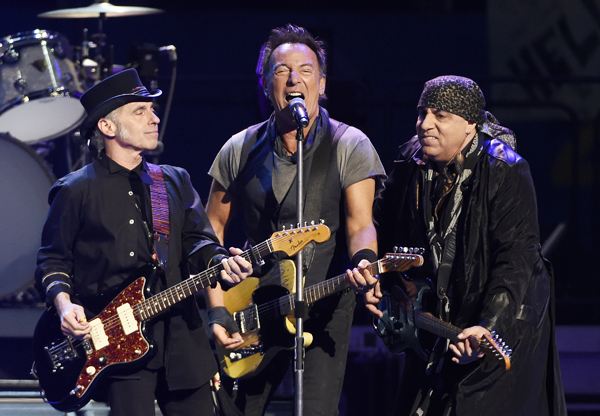 Bruce Springsteen, center, performs with Nils Lofgren, left, and Steven Van Zandt of the E Street Band during their concert in Los Angeles on March 15. Springsteen offered a free concert recording for a limited time after he had to postpone a New York City show due to snow. More than 100,000 copies were downloaded, and it was the first time many music fans became aware of Nugs.net, a website that offers concert experiences to those who can’t make it to the arena. [AP/NEWSIS]

NEW YORK - Bruce Springsteen’s generous gesture to snowbound followers this winter was the first time many music fans became aware of Nugs.net, a website that offers concert experiences to those who can’t make it to the arena.

Phish, Metallica and Pearl Jam also sell recordings of their shows through Nugs. The website’s emergence illustrates the growing importance of the live music industry at a time recording sales have sharply fallen, giving acts with strong live reputations a new revenue stream.

“As the future unfolds, I think every touring act is going to have to do something along these lines,” said Marc Reiter, who manages Metallica and Red Hot Chili Peppers at Q Prime.

The website’s roots date back to the 1990s when two friends who grew up in the Philadelphia area, Brad Serling and Jon Richter, created it to share their recordings of Grateful Dead concerts. They reached out to the band for permission and the response, basically, was “what’s a website?”

By the beginning of the century, their recordings had become so popular that the band’s lawyers gave them two choices: shut it down or go into business together. Serling worked briefly for the Dead.

Nugs officially became a business when the men offered copies of Phish’s 2002 New Year’s Eve concert for sale. As its only client at the time, the site grossed more than a million dollars.

Nugs has expanded to stream audio and video of live shows on a pay-per-view basis; Metallica streamed a concert through the site the night before the Super Bowl. For a monthly or yearly subscription, Nugs also grants unlimited access to a library of more than 10,000 shows.

Springsteen offered a free concert recording for a limited time after he had to postpone a New York City show due to snow. More than 100,000 copies were downloaded. His concert downloads generally cost $9.95, with CD copies $23 and audiophile options also available.

The jam band community is big on Nugs because its acts view each concert as a unique experience. A band that follows the same setlist every night, hitting precise cues for dancers and lights, isn’t made for Nugs. The acts must be confident enough to sell all their shows without editing, even on lousy nights.

If something is held back, fans notice and conspiracy theories begin.

“Sometimes I can be somewhat hesitant,” admitted Aron Magner, keyboard player for Disco Biscuits. “The segues don’t go as planned or there was a wrong note, or a series of wrong notes. But that’s what this genre is all about. It’s walking on a tightrope without a net. Everyone understands that and it’s part of the fun of it. You don’t get these amazing moments unless you are willing to jump off a cliff.”

If Springsteen hadn’t spent time surfing YouTube and come across snippets of his concerts with terrible sound quality, he might not have reached out to Nugs, Serling said.

The recordings come from a mix of a band’s sound board at a show and from the venue itself, a combination that promotes clarity and avoids sterility. Nugs sells recordings through their acts’ website and on their own, trying to make it an easy experience for the musicians. Financial details of the arrangements aren’t released.

Take away the recording costs, and it’s essentially found money - a way to profit from a concert outside of ticket sales. It’s primarily a service for the die-hard fan: Springsteen offers a discount to fans who purchase every single show of the “River” tour.

“Our fans are both loyal and rabid and have always been voracious to devour as much content as we are willing to deliver,” Magner said. As Disco Biscuit members get older, they don’t tour as much, he said. Nugs offers them a way to stay in touch.

The recordings sell at a consistent level, he said. “But if there is a specific show that rises above [the norm], the word will spread pretty quickly,” he said.

Reiter said that for the bands he manages, Nugs has been great service to their most loyal fans. “It has been better than we ever thought,” he said.

The Nugs founders are looking to expand into more musical styles, like country or electronic dance music.

“A majority of the artists we work with have a family business around them,” Serling said. “If you’re not just a one-hit wonder, if you have a live concert following, then we are right for you.” AP