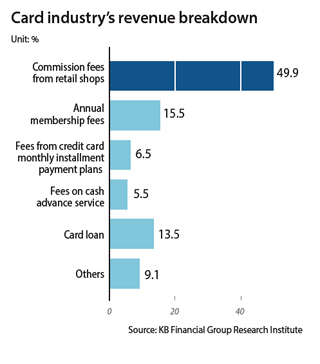 Local credit card companies are collaborating with non-financial businesses in a bid to improve profitability and make inroads into overseas markets.

Shinhan Card announced its plan to collaborate with the government and enter the real-estate lending and real-estate brokerage fee payment businesses on Tuesday.

In association with the Ministry of Land, Infrastructure and Transport, Shinhan will build an electronic real-estate contract system for housing transactions in Seocho District, southern Seoul. The card company offers lower lending interest rates than other credit-based lending products available at financial institutions and exempts fees.

Samsung Card launched a smartphone payment program with Samsung Electronics on Tuesday called the Galaxy Club, where Galaxy S7 buyers on a two-year installment payment plan can exchange their old phone for the next-generation Galaxy S smartphone the following year.

Lotte Card launched a card that offers heavy discounts on spending on cars. It includes lease, fuel, insurance and chauffer services, by collaborating with the group’s Lotte Rent-a-car. Card companies have not been active in expanding the auto payment business, as local carmakers such as Hyundai Motor, have dominated the sector with the group’s lending affiliate such as Hyundai Capital.

Some card companies are also trying to find alternative sources of profit from overseas, largely emerging economies with plenty of growth potential.

Shinhan Card last year has entered Indonesia, Kazakhstan and India where the bank affiliate has operated for the past couple of decades. It is planning to enter Myanmar in the second half of this year.

BC Card obtained a business license from Indonesia at the end of January to establish a joint venture with a local card company. The two companies have pushed monthly credit card installment payment products for cars and lending businesses.

KB Kookmin Card signed an agreement this week with Indonesia’s Bank Central Asia to launch a service where Korean residents there can get credit cards based on credit held at home.

“The credit card market in Korea is already saturated, so that additional expansion is difficult unless they acquire each other,” said Ku Yong-uk, a senior researcher at KDB Daewoo Securities. ”Expanding overseas, in particular to emerging markets, is good strategy for local card companies.”

Overseas expansion costs less than making investments on new technology-enabled businesses at home and has plenty of low-risk middle-class customer bases to expand, Ku said. He added that gaining a card business license - which is a consumer finance business - is relatively easier than other types of financial sectors such as banking, said Ku.

Lee Cheol-ho, an analyst at Korea Investment & Securities, suggested that the card companies will also expand businesses using payment information as a means of personal credit rating and marketing for other sectors.

“A credit card payment record is the most credible standardized information to understand consumers,” Lee said. “So, I think the companies will profit from consumer data analysis by also collaborating with social media.”