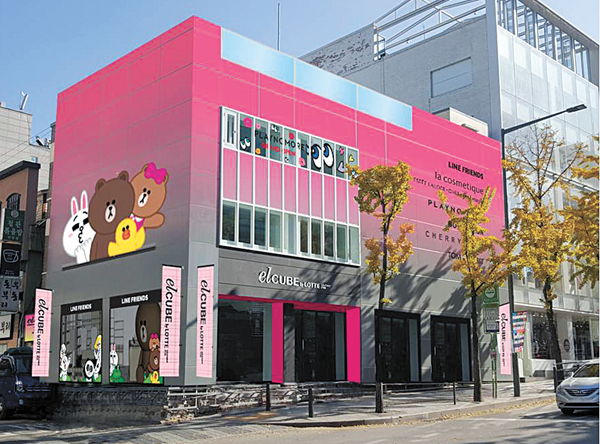 Lotte Department Store will open a new type of shopping mall on March 25 in the trendy Hongik University neighborhood in western Seoul to combat the sluggish growth of traditional brick-and-mortar retailers.

The country’s top department store chain said Wednesday that its new, relatively small “el CUBE” store focuses specifically on young, fashion-conscious shoppers. This is a departure from the retailer’s usual strategy of offering something for everyone at its department stores.

A second el CUBE will be opened nearby within the year.

“el CUBE can adopt different concepts and focuses, such as beauty and lifestyle, depending on the location and needs of consumers,” Lotte said in a statement.

The retailer said that it took its cues from Japan’s popular Isetan Department Store, which has several branches with different offerings.

Isetan Mirror is dedicated to cosmetics and beauty products while its ALTA mall targets young shoppers in their 20s.

The decision to set up in the trendy neighborhood, known for its urban art and indie music culture and heavily frequented by 20-somethings, is clearly strategic.

The area’s population is also on the rise as some start-ups have begun to move their offices there.

Largely because of factors like these, the average number of daily users of Hongik University Station has grown from 72,000 in 2014 to 78,000 as of last year. The neighborhood is also expanding in size, extending further and further toward nearby Hapjeong-dong and Yeonnam-dong.

The experiment with the new store is part of Lotte Department Store’s broader efforts to navigate a tough retail climate that has affected sales at many larger retailers.

More consumers are looking for cheap bargains online, and this is pushing down sales at major department and discount stores.

“The key is to find new consumers, since department stores are expected to face headwinds and low growth,” said Woo Gil-jo, head of the merchandise strategy division at Lotte Department Store. “We will satisfy the fast-changing tastes of young consumers through the opening of el CUBE stores going forward.”

Lotte extended the operating hours of el CUBE to keep pace with other stores in the neighborhood, which is known to be most lively at night.