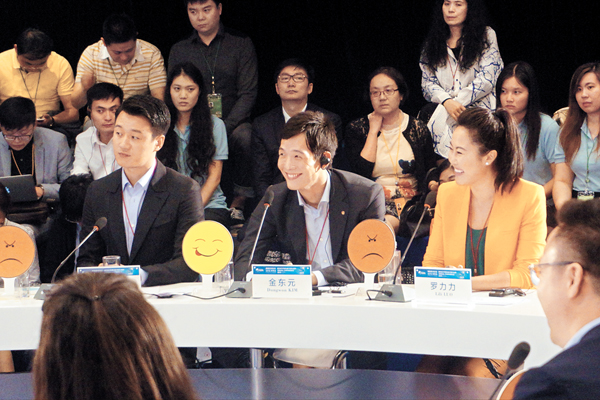 Kim Dong-won, a digital team leader of Hanwha Life, attended the Boao Forum for Asia, which is also known as Asia’s Davos Forum.

At the forum held in China on Tuesday, Kim, the second son of Hanwha Group Chairman Kim Seung-youn, attended the leaders’ session along with 10 young leaders and took part in a debate on the subject of “redefining distance,” which discussed how the advancement of mobile technologies can influence the distance between people.

Prior to Boao, Kim attended the Davos World Economic Forum in Switzerland in January.

“The core value of human relationships will not be changed no matter how much mobile and artificial intelligence technologies get better,” Kim said. “The advancement of high-end tech should move forward in a way that can make people happier.”

During the forum, Kim discussed the growth engines available in fintech when he met members of Ant Financial of China, an online payment services provider. On Monday, he attended a signing ceremony where Hanwha Life and Yida Group of China agreed to help establish start-ups in each other’s nation.