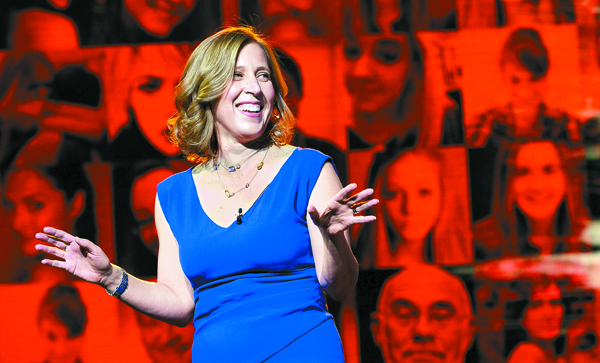 Susan Wojcicki, the CEO of Youtube, currently the world’s largest video streaming platform, at a round-table interview held in the company’s headquarters in San Bruno, California, on Feb. 24. [YOUTUBE]

SAN BRUNO, California - The relationship between those who watch television and those who make it has changed drastically over the last decade, and few understand that better than YouTube’s CEO, Susan Wojcicki.

According to Wojcicki, the shift toward on-demand content will continue to fundamentally transform the way video is distributed and consumed.

“We just see an opportunity for TV to be remade right now,” she said in an interview with the JoongAng Ilbo and reporters from the United Kingdom, France, Germany, Australia and Japan. “We think TV is being reinvented.”

The CEO of the world’s most popular video-streaming platform is frequently cited along with Yahoo CEO Marissa Mayer and Facebook COO Sheryl Sandberg as rare examples of female leaders in Silicon Valley.

During a 70-minute interview at YouTube’s headquarters in San Bruno, California, on Feb. 24, she was full of energy to talk about her work, the future of entertainment and what it’s like to be a powerful woman in tech.

Q. What is YouTube’s core strength?

A. It is the fact that YouTube enables freedom of expression and enables anyone to have a voice.

There’s so much talent in the world and so many people who if they had access to this information could do some really amazing things.

Actually, there was a really moving story. People went to India, and they gave YouTube to this family that had never access to it before. A week later, they asked the son, “What did you do with it?”

He said, “Oh, I started working on my solar car.”

We reach more than a billion users every single month we’ve seen significant growth for the last three years, more than 50 percent year on year.

The world is going to have to move to a more on-demand, social, diverse, mobile type of world where any content is available on any device at any time from anywhere. So, having everything on demand.

We’ve seen TV numbers decline, and we’ve seen users moving to online videos, so our focus right now is on how we capture that opportunity.

What kind of changes do you see in the future of TV?

I think there’s a lot of really great content that’s available on traditional networks on cable, but the users are going to expect to see it on demand. And they’re going to want to cross all their devices.

Is there any pressure on YouTube now that Facebook has joined with Samsung in the virtual reality sector?

Regardless of what Facebook does, we have the largest body of videos and so we want to make sure when [users] come to YouTube, they’re actually able to see videos in virtual reality, too.

We’ve also been investing a lot more in real virtual reality, and [we’ll] figure out how to really enable that content to be significant for us.

Tell us how you became such a powerful figure considering the lack of female leaders in tech.

A lot of women are really curious about how I got here. Well, I think it’s a combination of luck. I was definitely at the right place at the right time, and I worked really hard.

I have five kids, and now I want to use my position to fight for issues that I think are really important for women that nobody else is fighting for.

Is there a good work culture in Silicon Valley, particularly for women?

I think that Silicon Valley culture is more flexible, and so it’s more forgiving as it’s more results-oriented. And I’ve been able to achieve results, so people were okay with whatever other things that had going on.

What about you or your personal life makes you an exceptional CEO of YouTube?

First of all, I’ve been working in tech for 17 years, so I know lot of people and have a lot of very real experience. I think my kids are another secret weapon of mine. Because, you know, they are the next generation. I look at how they use the Internet and how they use all the social products, and they tell me if something isn’t working for them. So I feel like I have a little focus group at home.

Wojcicki majored in history and literature at Harvard University. She was the 16th to join Google, helping grow the company from the ground up. Wojcicki headed the advertisement division while she was at Google and moved to YouTube as CEO in February 2014.