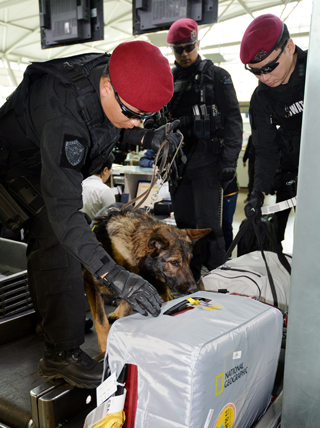 Airport police inspect baggage to detect any explosive with a sniffer dog at Incheon International Airport on Wednesday as counterterrorism measures were beefed up following the Brussels attacks.[NEWSIS]

The Korean government joined the international community in voicing solidarity for Belgium and “strongly condemned” the simultaneous terror attacks in Brussels on Tuesday that killed more than 30 people and injured some 200.

The Korean Ministry of Foreign Affairs said in a statement, “Terrorism is a crime that cannot be justified under any circumstances and should be eradicated by all means.”

The ministry said it is “shocked and concerned over the fact that a large number of innocent people were killed” through the terrorist attacks in Brussels and expressed its deepest condolences to the victims of the attacks and their bereaved families.

The Islamic State (ISIS) claimed responsibility for the two explosions at Brussels Airport and another blast at the Maelbeek Metro station near European Union headquarters and the U.S. Embassy in the Belgian capital on Tuesday.

An ISIS-affiliated website claimed suicide bombers carried out the attacks in Brussels, which it called “a country participating in the international coalition against the Islamic State.”

These explosions came a little over four months after the tragic attacks in Paris on Nov. 13 that left 130 people dead.

The Korean Foreign Ministry said Seoul strongly supports the Belgian government and renewed its pledge to actively join efforts of the international community to work towards eliminating terrorism.

Korea is also a part of this U.S.-led coalition to combat ISIS.

There have been no Korean casualties confirmed as of Wednesday afternoon, according to the Foreign Ministry. The ministry has been in communication with the Korean Embassy in Belgium to confirm the safety of Korean nationals there.

The Minister of Land, Infrastructure and Transport Kang Ho-in ordered airport authorities to put all efforts into security following the Brussels attacks, and Incheon International Airport officials on Wednesday said it is bolstering counterterrorism measures.