Yoo may be squeezed out of the ruling party

Yoo may be squeezed out of the ruling party 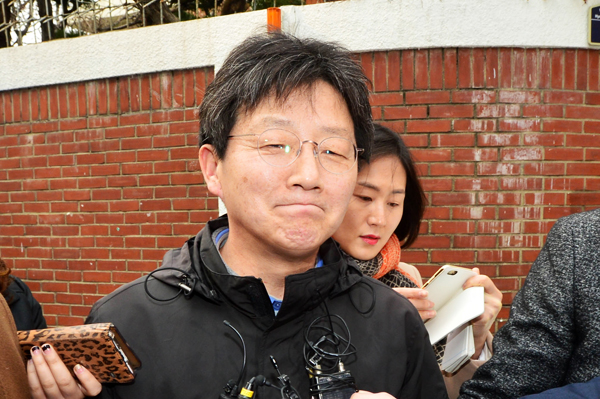 Rep. Yoo Seong-min walks out of his parents’ house in Daegu, breaking an 8-day seclusion, on Wednesday. But Yoo was silent on the question of whether he will run for lawmaker in Daegu’s Dong B District as an independent.[NEWSIS]

Speculation grew Wednesday that the ruling party will not nominate a candidate for an electoral district in Daegu in order to avoid giving it to Rep. Yoo Seong-min, an adversary of President Park Geun-hye - but also to diminish any backlash for squeezing him out of the party.

Chairman Kim Moo-sung of the Saenuri Party held a press conference at 5:30 p.m. Wednesday and announced that the party has completed almost all of its nominations, but a candidate for Daegu Dong B District had not been decided. Kim asked the Nomination Committee to make a decision at a 7 p.m. meeting, which the Supreme Council would endorse at a 9 p.m. meeting.

“If the Nomination Committee fails to make an appropriate decision on Daegu Dong B District, the party must not field a candidate there,” Kim said. “To run in this district [as an independent], it is necessary [for Yoo] to leave the party by midnight today. I am saying this at this hour to make it clear.”

Daegu Dong B District, currently represented by former Saenuri floor leader Rep. Yoo, has been a ticking political time bomb over the past few weeks. The Supreme Council, chaired by Kim, and the Nomination Committee, chaired by Rep. Lee Han-koo, a key Park ally, tried to avoid making a decision on Yoo’s application run for reelection.

Wednesday was the deadline for Yoo to leave the party and run as an independent because final candidate registration with the National Election Commission starts Thursday. Once the process starts, changing party affiliation is not allowed. If Yoo did not leave the party by the end of Wednesday, he would lose the opportunity to run.

Yoo was once an ally of Park, but the two parted bitterly last year after she publicly condemned Yoo for “politics of betrayal” over a political deal he brokered with the opposition. Yoo resigned from the floor leader post and became an icon of resistance to the president.

After Yoo declared his bid to run in Daegu Dong B for a fourth-term, Park loyalists opposed awarding a nomination to him. They said Yoo has a different ideology and philosophy from the ruling party.

Eliminating Yoo, however, was not easy because his spat with the president elevated his political profile. The party worries that it will lose battles in the capital region if it does Yoo wrong.

Earlier Wednesday morning, the Supreme Council asked the Nomination Committee to consider Yoo’s fate and make a decision. Chairman Kim also said he told the council members that Yoo must be given a nomination.

“I haven’t made public what was discussed during Supreme Council meetings because that was the etiquette,” Kim said after the meeting. “Until now, I argued that Yoo must be nominated, but my demand was not accepted.” Kim also said he proposed a primary in Daegu Dong B District to decide Yoo’s fate, but the Nomination Committee just sat on it.

“Today, I told the Supreme Council there is no time to hold a primary, and it is appropriate to nominate Yoo,” Kim said. “I said it clearly. Of course, not all members agreed and some said we should vote on this. But I made clear that party regulations do not allow such a matter to be decided by a vote.”

The Supreme Council has nine members, and only Kim and another member, Kim Eui-dong, reportedly argued that Yoo should be nominated. The rest - mostly Park loyalists - reportedly disagreed.