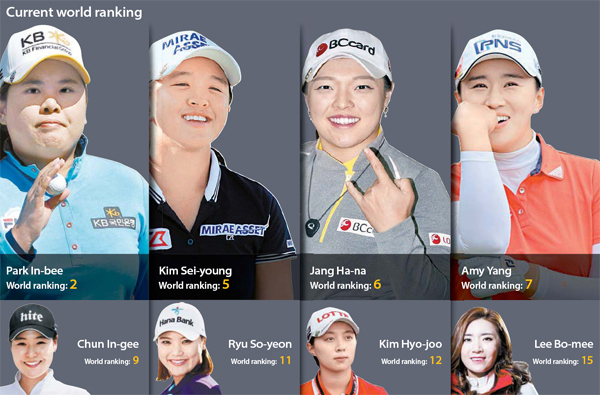 Competing in the Olympics is often a once-in-a-lifetime event for an athlete. But for golfers, the upcoming Games has special significance because it will be the first in 112 years that their sport has been represented.

According to Olympics regulation, only four golfers per country can play in the Summer Games, and those golfers are determined based on world ranking. About a year ago, South Korean golfers above No. 10 in the world ranking were safe to make the cut. But in the last year, the cut-off ranking has tightened to No. 7.

Kim Sei-young recently climbed up in the world ranking from No. 7 to No. 5 after her win at the JTBC Founders Cup. Currently, there are four players within the top seven: Park In-bee at No. 2, Kim Sei-young at No. 5, Jang Ha-na at No. 6 and Amy Yang at No. 7. Chun In-gee (9), Ryu So-yeon (11), Kim Hyo-joo (12), Lee Bo-mee (15) and Choi Na-yeon (20) are also in contention, according to the Rolex rankings. Competition for a spot will continue until July, when the roster will be finalized.

Kim Hyo-joo, who rose as high as seventh in the rankings after winning the Pure Silk-Bahamas LPGA Classic in January, has fallen to the 12th position. “I try not to care too much about the Olympics,” she said. “I want to play in the Olympics, of course, but I have been too stressed over it and I think the stress was reflected badly in my recent performance. I would like to focus on the tournaments and the ticket to the Olympics might just follow.”

Chun, who placed third at the Coates Golf Championship and second at the Honda LPGA Thailand in February this year, was initially a sure-thing for a spot. But she had to forfeit the past two events because of a back injury incurred in an accident in Singapore early this month before the HSBC Women’s Championship. Since then, her ranking has dropped to ninth and is expected to drop further since Chun will also miss the next event, the KIA Classic.

Park, who is currently the top-ranked Korean golfer, is the most likely to wear the Korean flag in the summer games. But even Park is not in her best shape after an injury in the Pure Silk-Bahamas LPGA Classic. Still, as long as her current slump doesn’t drag out, she will play in the Olympics. Jang and Kim Sei-young are currently at a good pace and are ranked first and second in the LPGA Official Money standings.

The bottom line: Park is likely to be selected for the national team, while Jang and Kim Sei-young are the most promising at the moment. But no one can get too comfortable as the standings could be upset at any time before July. Everyone will have to continue to put out their best effort.

Rolex Ranking is determined based on a player’s performance over a rolling two year period. Records from the most recent 13 weeks are weighted more heavily than past records. Players receive more points from major events such as the AXA Inspiration than regular LPGA tours. The Olympics roster will be fixed based on the ranking as of July 11.