Galleries show off dansaekhwa and beyond

Galleries show off dansaekhwa and beyond 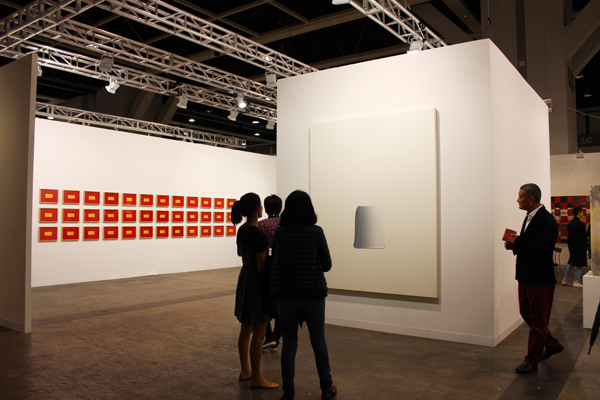 A painting by Lee Ufan is on display at the London-based Lisson Gallery’s booth in the Art Basel Hong Kong 2016. The popularity of dansaekhwa, or Korean monochrome abstract paintings, continues to stay strong.

HONG KONG - While the popularity of dansaekhwa, or Korean monochrome abstract paintings, is going strong at the prestigious Art Basel fair’s 2016 edition in Hong Kong, the efforts of Korean galleries to also promote later generations of artists are accelerating.

Dansaekhwa, characterized by minimal colors and unusual textures, emerged in the mid-1960s but was not well-known in the global art scene until a few years ago. The continuing international interest in dansaekhwa is evident at the fourth edition of Art Basel Hong Kong, which officially kicked off on Thursday at the Hong Kong Convention & Exhibition Center.

At numerous booths including those of the London-based Lisson and Ben Brown galleries and the Paris-based Galerie Kamel Mennour are Lee Ufan’s paintings from the 2000s, each of which consists of only one large dot on a white field. The artist explained at several press meetings that his paintings represent the tension between negative and positive space, and between the artificial and the natural. Many viewers stopped and took pictures of them with their cell phones. 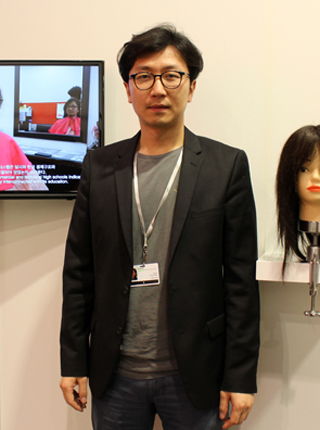 Artist Lee Wan poses with his “Made In” series video work and a wig made of his own hair at the 313 Art Project booth at Art Basel Hong Kong 2016.

The earlier paintings by the 79-year-old artist could also be seen at several booths including the New-York-based Dominique Levy and Los-Angeles-based Blum & Poe galleries. The latter also includes a painting by Yun Hyong-keun (1928-2007) from his “Umber Blue” series, which spans the border between East Asian ink paintings and Western oil paintings. The series is also featured at the booth of the Seoul-based PKM Gallery.

Paintings by other dansaekhwa masters including Park Seo-bo and Chung Chang-sup are on view at the booths of the Paris-based Galerie Perrotin and others. And Park’s solo exhibition at Perrotin’s Hong Kong branch started on Monday.

“The boom of dansaekhwa is likely to go on,” Lee Hyun-sook, founder and head of Kukje Gallery, told the Korea JoongAng Daily during a preview Tuesday. She was at the gallery’s booth, which includes paintings by Lee Ufan and Park Seo-bo as well as by Kwon Young-woo (1926-2013), who explored the possibilities of abstract expression with traditional Korean materials such as hanji paper.

“Adeline Ooi, the new Art Basel director for Asia, asked us to present some other Korean artworks than dansaekhwa, saying that foreign people have the wrong idea that Korean art is only dansaekhwa,” Hakgojae Gallery Director Woo Chan-gyu told reporters Tuesday afternoon after the preview. “She was overjoyed on seeing our booth ? in particular, the paintings by Suh Yong-sun.”

“Of course, the popularity of dansaekhwa is valuable, as it has a spillover effect,” he continued. “The prices of other Korean artists have climbed thanks to the surge of dansaekhwa prices.”

“Now it’s time to promote other local artists on the global art scene. I have brought their most important - representative - works here,” Woo added. “When we bring such works of high quality, even if they are not sold during the fair period, they tend to be bought later by collectors who were very impressed during the fair.” 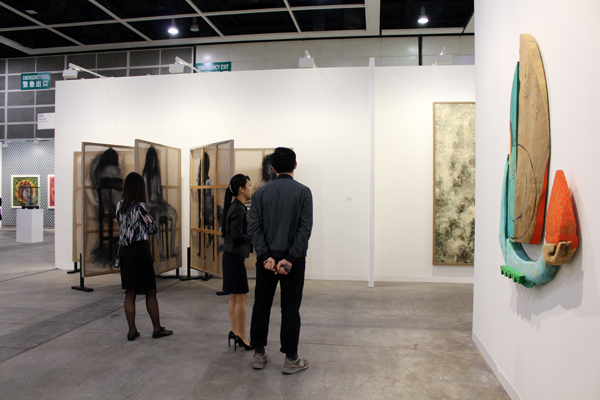 The booth of the Seoul-based Hakgojae Gallery at Art Basel Hong Kong, which runs through Saturday.[MOON SO-YOUNG]

Even artists who have been active in public art projects, museum exhibitions and biennials but haven’t been so appreciated at art markets are testing their marketability at Art Basel Hong Kong.

One of them is famed Korean artist Choi Jeong-hwa, who is represented by Park Ryu Sook in the fair’s “Insights” section, which presents solo shows or thematic exhibitions by galleries based on region. The sector includes two other Korean galleries: EM and Leeahn.

And another is the young artist Lee Wan, who is represented by the 313 Art Project gallery in the “Discoveries” sector, which showcases works by emerging contemporary artists.

“It is the first time I’m participating in an art fair,” Lee said at the booth. “It’s funny and I’m curious whether my conceptual works will be sold.”

Lee, 37, the first winner of the ArtSpectrum Award from the Leeum, Samsung Museum of Art, is presenting two video pieces from his “Made In” series, which won him the prize in 2014, as well as other works. “Made In” is a series of documentary films in which the artist alone produces several consumer goods that are commonly produced through the division of labor.

All his works raise questions about the capitalist system, especially in Asian countries including Korea that went through colonization and liberation in the early 20th century, creating a strange harmony with the setting of the fair.