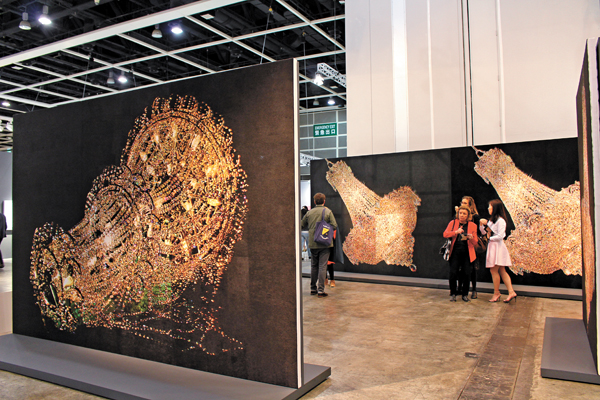 Visitors at a preview of Art Basel Hong Kong 2016 on Tuesday look at Korean artist Kyungah Ham’s “Chandeliers for Five Cities,” which are part of the art fair’s “Encounters” sector. [MOON SO-YOUNG]

HONG KONG - Five huge embroidery paintings that depict splendid tilted chandeliers are now on display in a wide-open space between the gallery booths of Art Basel’s 2016 edition in Hong Kong.

Titled “Chandeliers for Five Cities,” they were created by Korean artist Kyungah Ham in secret collaboration with North Korean craftsmen.

Ham’s work is part of the “Encounters” sector of the prestigious art fair that kicked off on Thursday and runs through Saturday at the Hong Kong Convention and Exhibition Center. For major collectors such as museums, the sector presents large-scale sculptures and installations, which the traditional art fair stands could not accommodate, Art Basel organizers say.

This year, the works of 16 artists are featured in the Encounters sector, including an altar-like installation of old Chinese furniture and goods titled “Opening of a Closed Center” by Chinese artist Chen Zhen and a group of sculptures titled “Intimate Evolution” by Israeli artist Arik Levy, along with Ham’s work.

“Immersion, wonder and unpredictability are key to this year’s selection of artworks,” Alexie Glass-Kantor, a curator for the Encounters sector, told reporters at a preview on Tuesday. Among them, Ham’s works establish the artist’s “own line of unauthorized communication from South to North Korea,” the curator said.

For the project, Ham created digital images of chandeliers on a computer and sent their prints via middlemen in China to embroiderers in North Korea. Then, they recreated the digital images by hand, stitch by stitch, and sent them back to the artist.

Through this process, some of the images were lost, or the finished pieces were returned with quite different from the original plans. It represents the imperfect communication between the two Koreas, the artist said.

“And the stitches represent the hidden personalities of the anonymous North Korean craftsmen, while the chandeliers formed by the stitches symbolize the superpowers related with the division of the Korean Peninsula,” she added.

The number of the artists participating in the Encounters sector is down from 20 of last year. It depends on the floor plans and, at the same time, the fair is getting more “selective,” explained Marc Spiegler, the global director of Art Basel.

This year’s Art Basel Hong Kong - the fourth edition in the harbor city - features a total of 239 galleries from 35 countries, including nine galleries from Korea.

Adeline Ooi, who has been working as Art Basel’s director for Asia since last year, said in an interview with the Korea JoongAng Daily in January, “More than 500 galleries worldwide applied for the fair and less than a half have been selected.”

Asked about the biggest difference in this year’s edition from last year’s, Spiegler said in a press conference on Tuesday, “It would be Adeline Ooi, as it’s her first [Art Basel Hong Kong] show. Having someone who knows so well the artists and galleries of Asia and can communicate in seven different languages across the continent has been a huge help.”

“I would also say that the continuing depth and breadth of the great Western galleries present in the show makes the quality and diversity, with high-level artworks that have never been shown before in Asia,” he added.

Leading Korean gallerists participating in Art Basel Hong Kong agreed. “The quality of the show has much improved this year,” said Woo Chan-gyu, director of Hakgojae Gallery based in Seoul.

“The art fair has become refined in general with more Western galleries present,” said Lee Hyun-sook, head of Kukje Gallery, also based in the Korean capital.

The two galleries, as well as Arario, PKM, and One and J, constitute the Korean participants in the main “Galleries” sector. Among the 187 galleries in this sector are the New York-based Gagosian Gallery, the London-based White Cube, the Paris-based Galerie Perrotin and the Zurich-based Hauser & Wirth.

It remains to be seen how the changes to the fair this year will affect sales. Art Basel Hong Kong is one of the key events that will determine the direction of the 2016 global art market. Despite concerns about China’s economic slowdown, the results of the previews on Tuesday and Wednesday, during which major collectors visited, were not bad, many gallerists said.

“The first-day sales at our gallery seem to be better than those of last year,” Lee Youngjoo, the Korea representative of the New York-based Pace Gallery, said on Wednesday, pointing to a painting by Japanese artist Yoshitomo Nara which has been already sold.

Kamel Mennour, founder and director of the Paris-based gallery named after him, also said first-day sales were strong.

Among the top collectors who visited Art Basel Hong Kong during the previews was Uli Sigg, one of the biggest and most influential collectors of Chinese contemporary art. He donated about 1,500 pieces from his collection to the M+ Museum, a new Hong Kong Museum that is under construction and will be complete in 2019.

Part of the donated collection is now on view as the “M+ Sigg Collection: Four Decades of Chinese Contemporary Art” show at ArtisTree in Hong Kong until April 5.

And the celebrities who visited the Art Basel Hong Kong preview on Tuesday included Leonardo DiCaprio, who recently won the Oscar for Best Actor, and Korean actor Lee Jung-jae, who is a longtime art collector and a goodwill ambassador for Korea’s National Museum of Modern and Contemporary Art.