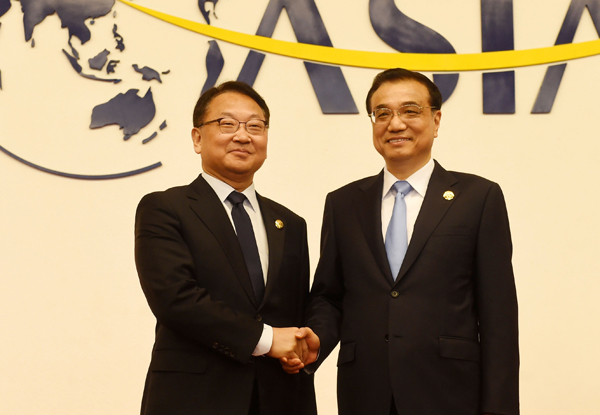 Asian countries need to both cooperate with each other and pursue economic reform at home for the sake of future growth, Finance Minister Yoo Il-ho said at a forum in China.

“I propose that each Asian country become a pioneer in securing future growth engines while also being an architect in solidifying economic defenses and development in Asia,” Yoo said at the Boao Forum in Hainan, southern China, on Thursday, “and also take the role of a reformer, who would concentrate on executing structural reforms.”

The Boao Forum is China’s version of the annual World Economic Forum in Davos, Switzerland.

He stressed that Asia is becoming the center of the world’s economy, and the potential of the region is expected to expand with the launching of the Asean Economic Community (AEC) in Kuala Lumpur, Malaysia, in November 2015.

The AEC is supposed to create an economically integrated system in the region that will allow free trade and larger investments among the countries involved.

“The huge Asian market with a population of 3.2 billion is not only the major base and battlefield for global companies but also the world’s factory and hub of new industries,” Yoo said.

“But at the same time, absolute poverty is high, and income imbalances remain. We are faced with a situation in which we either continue to grow or grind to a halt amid global uncertainties.”

Yoo said Asia needs to focus both on future developments and create an environment to improve job opportunities, education and the environment. He mentioned the need for a pioneer spirit and cited the Korean government’s “creative economy” agenda as an example.

“The emergence of platform businesses, development of artificial intelligence and new environmental challenges, and the importance of new growth engines have become greater than in the past,” Yoo said.

“The Korean government has been working on fostering a creative economy as well as environmentally friendly new energy industries.

“But at the same time, we have tried to provide a better life in the Asian region by providing innovation in the education area using ICT technologies as well as preventing the spread of contagious diseases, particularly to the most vulnerable class, which are young girls, in underdeveloped countries.”

Yoo said he expects a leading role for the Asian Infrastructure Investment Bank in narrowing the gaps in infrastructure among different Asian countries, and that it would contribute to securing growth in the region.

The minister stressed cooperation and cited the Chinese proverb that when two people become one in heart, they can cut through steel.