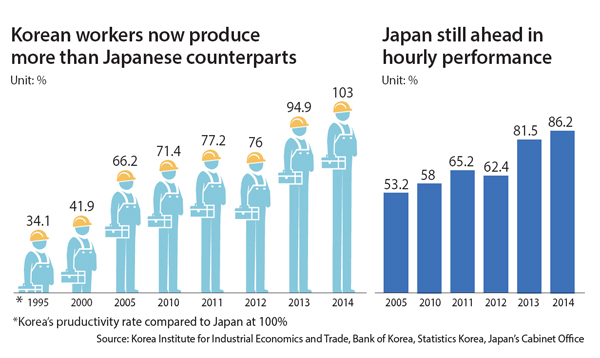 The productivity level of Korean workers in the manufacturing industry has exceeded Japan for the first time since 2014.

However, employees burning the midnight oil at the office are still considered a major issue that needs to be resolved, according to a Korea Institute for Industrial Economics and Trade study released Thursday.

The productivity of each employee in the manufacturing industry at market exchange rate was 103 percent that of Japan in 2014. That’s a huge improvement from 34 percent in the mid-1990s.

The improvement was largely due to Korean companies rapidly catching up to Japanese rivals in productivity, including technological development. Additionally, the sharp depreciation of the Japanese yen resulting from the aggressive Abenomics, a bid to lift the country from two decades of depression, also helped Korean companies outrun Japan.

According to the Bank of Korea, in 2014, the average won-dollar exchange appreciated against the U.S. greenback 3.82 percent compared to the previous year. The Japanese yen plummeted 8.5 percent during the same period.

Exports during that year grew 2.3 percent to $572.7 billion. During the same period, Japanese exports shrank 4.37 percent year on year to $683.9 billion. However, it is still uncertain whether improvements in Korea’s productivity will continue, especially as many companies are struggling under worsening growth.

“The Korean manufacturing industry for some time has been enjoying far stronger productivity than that of Japan,” said Kang Doo-yong, senior researcher at the Korea Institute for Industrial Economics and Trade.

“However, whether this momentum will continue depends on the speed of technological development as well as the foreign exchange situation.

“We believe that Korea’s labor productivity has exceeded that of Japan for last year but the situation could be reversed this year as the productivity momentum in the Korean manufacturing industry has been slowing down while the Japanese yen has been appreciating.”

The lengthy working hours of Korean employees also continues to be a major issue. Although labor productivity by hours has improved compared to previous years, it is still short of Japan.

Korea’s hourly productivity was only 86 percent of Japan’s. The institute blamed it on long working hours where the average labor hours of Korean workers was 20 percent longer.