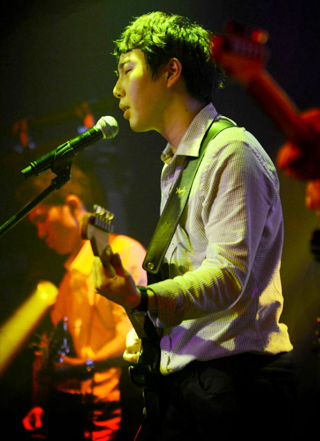 Singer-songwriter Jang Beom-jun was planning to make a comeback last night by releasing his second regular album, “Unplugged Highlight,” and holding a special performance that was to be broadcast live via 1theK.

The former lead singer of the band Busker Busker was to hold a live show called “Wonder Live,” at which he showcased the new album’s title song, “To the Rain,” for the first time.

His live performance of “To the Rain” was slated to air on 1thK’s Facebook page and MelOn TV at midnight today.

Roughly 80 fans were selected before the event to attend the show. The footage of the entire concert will become available on 1theK’s YouTube channel and MelOn TV on March 31.

The singer’s craftsmanship as a songwriter was proven yet again recently by the startling reappearance of “Cherry Blossom Ending” on the music charts.

The song has ranked high on Korean music charts every spring since it was first released in 2012, earning it the nickname “Spring Zombie.”

The star singer is soon setting off on a national tour, starting with four concerts at Blue Square Samsung Card Hall in Yongsan District, central Seoul. The dates of the first four concerts are April 1, 2, 8 and 9.