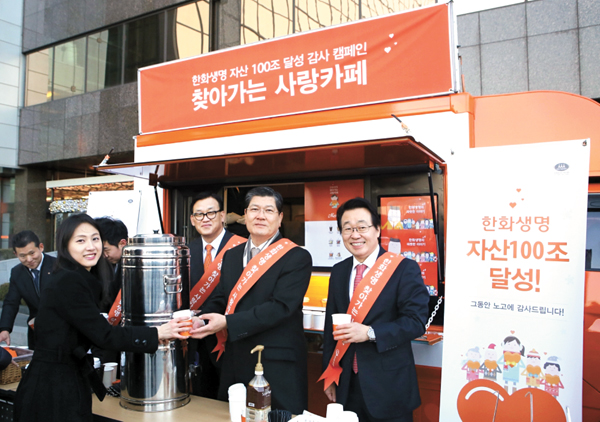 Hanwha Life’s CEO and board of directors kick off a nationwide campaign offering beverages and encouragement in a portable cafe on Jan. 7. The campaign was in celebration of Hanwha Life hitting the 100 trillion won milestone in total assets. [HANWHA LIFE]

At its current growth rate, the company is on course to exceed 200 trillion won in total assets by 2024.

The insurer’s total assets stood at around 29 trillion won at the time of Hanwha Group’s takeover in 2002, but it tripled to reach 100 trillion won in 2015. In the same period, its income from premiums increased by more than half to 14.96 trillion won, while its risk-based capital ratio, an indicator of asset quality, rose threefold from 95.6 percent to 277 percent.

Hanwha Life attributes its new milestone to customer-oriented management. Since taking office in 2011, Cha Nam-gyu, president and CEO, has made annual visits to financial planners in all of Hanwha Life’s seven regional headquarters to determine customer wants and needs.

In September 2007, the company introduced “At Your Doorstep Service” for greater customer convenience. The service dispatches financial planners to the homes or workplaces of customers who cannot visit the company in person. Last year, it extended its call center hours to make its consulting service available at night and on Saturdays.

Hanwha Life is also an industry leader in product development, having launched 14 new insurance products since the introduction of the exclusive licensing system. Its bridge pension, whole life insurance and hypertension health insurance are products developed to meet customer needs amid changing health and retirement trends.

Due to the relaxation of several regulations this year, Hanwha Life predicts that original ideas will become major determinants of success. It plans to gather feedback from financial planners who come in contact with younger customers and work them into the product development process.