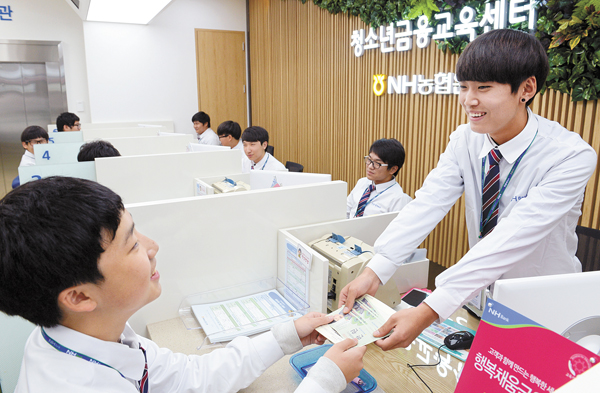 NH Nonghyup Bank has opened nine financial education centers since 2015. Allowing students to try their hand at banking, the centers were created in support of the Ministry of Education’s “Free Semester Program.” [NH NONGHYUP BANK]

NH Nonghyup Bank spent 99.1 billion won ($84.9 million) on corporate social responsibility (CSR) activities in 2014, the most of any company in the financial industry, according to a Korea Federation of Banks report.

The bank has topped the list every year since 2011, with its post-2006 annual average in CSR expenditures exceeding 100 billion won.

While over 50 percent of its CSR spending goes to the community and public service sector, NH Nonghyup Bank also extends its support to education, the arts and the environment.

The bank’s CSR activities include volunteer work by its employees, who share their skills and perform community service for the disadvantaged. NH Nonghyup Bank has staff-run volunteer groups in 157 cities and counties across the nation. In 2014, they carried out 3,561 acts of community service like distributing heating supplies and providing free meals.

NH Nonghyup Bank’s “Finance Classroom” is a talent-sharing service in which 1,327 employee volunteers provide free education to groups including multicultural families, North Korean defectors and the elderly. Its sessions are not only finance-related but also involve school violence prevention, career guidance and lessons on Korean culture.

Last September, NH Nonghyup Bank signed a business agreement with the Ministry of Education to open a financial education center for young people on the second floor of its headquarters. The center has since spawned eight branches and provided services to 118,000 people.

The bank’s “Ndorphine” is a similar service but uses the skills of university students rather than company workers. Ndorphine was established in May 2013 to facilitate knowledge sharing among students. Its programs offer help with university admissions, study tips and career counseling for children from disadvantaged families.

The number of Ndorphine volunteers nearly quadrupled from 28 to 103 between 2014 and 2015. The service is also expanding its reach, extending the scope of its activities from Seoul to across the nation.

One CSR activity unique to NH Nonghyup Bank is a weekly call service for senior citizens who live alone in the countryside. While the primary purpose of the calls is to keep the elderly company, they also raise awareness about financial fraud.

On top of its volunteer services, NH Nonghyup Bank continues to give back by providing small loans, financial support and free management consulting for the working class and small and medium-sized businesses.