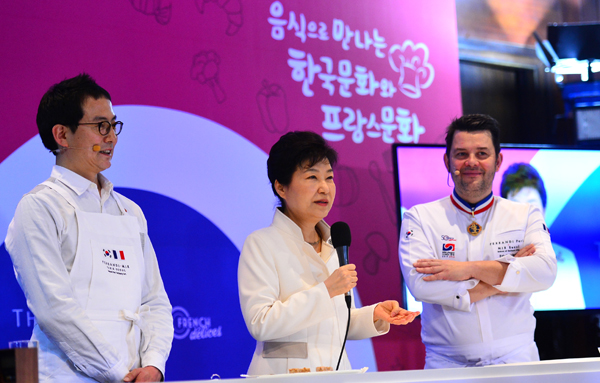 President Park Geun-hye gives a genial speech at a French food festival on Thursday. Renowned chef Eric Trochon, right, also joined the “So French Delices” food festival at the Shilla Hotel Seoul. The event was organized to mark the 130th anniversary of diplomatic ties between Korea and France. The food festival is one of many events that will take place this year to celebrate the anniversary. Celebrated French chefs are scheduled to showcase French culinary specialities at the festival, which runs until Saturday. In addition to Thursday’s festivities, there will be an open-air tasting event celebrating the enticing assortment of treats that are commonly found on the streets of France. The potpourri of French street food selections will be available at Gwanghwamun Square in central Seoul on Friday and Saturday. [NEWSIS]