Yoo left the Saenuri to run as independent

Yoo left the Saenuri to run as independent 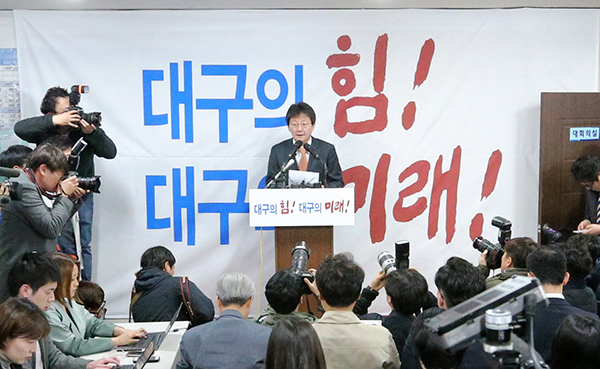 Rep. Yoo Seong-min, an adversary of President Park Geun-hye, left the ruling Saenuri Party Wednesday night to run as an independent in the April 13 general election.

Yoo held a press conference in his campaign office in Daegu at 11 p.m. to announce his decision. “The party has failed to show justice, common sense and principle during the nomination process,” Yoo said. “All it showed was embarrassing, anachronistic political retaliation.”

He, then, vowed to return to the party after winning the election, along with his allies who failed to win nominations for their ties to him.
Yoo was once an ally of Park, but the two parted bitterly last year after she publicly condemned Yoo for “politics of betrayal” over a political deal he brokered with the opposition. Yoo resigned from the floor leader post and became an icon of resistance to the president.
After Yoo declared his bid to run in Daegu Dong B for a fourth-term, Park loyalists opposed awarding a nomination to him. They said Yoo has a different ideology and philosophy from the ruling party.

Wednesday was the deadline for Yoo to leave the party and run as an independent because final candidate registration with the National Election Commission starts Thursday. Once the process starts, changing party affiliation is not allowed.

Daegu Dong B District, currently represented by former Saenuri floor leader Rep. Yoo, has been a ticking political time bomb over the past few weeks. The Supreme Council, headed by the party’s Chairman Kim Moo-sung, and the Nomination Committee, chaired by Rep. Lee Han-koo, a key Park ally, tried to avoid making a decision on Yoo’s application run for reelection. The move was largely interpreted as a strategy to squeeze him out of the party.