Per capita income falls for first time since 2009

Per capita income falls for first time since 2009 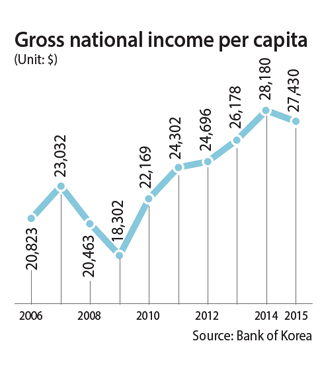 Korea’s per capita gross national income (GNI) declined in 2015, its first fall in six years, making the Park Geun-hye administration’s pledge of bringing the figure up to $30,000 highly unlikely.

The last time the figure dropped was in 2009, when Korea was heavily affected by the global financial meltdown. It shrunk more than 10 percent to drop to $18,302.

In terms of per capita income, Korea has been stuck in limbo for almost a decade since it first reached $20,000 in 2006.

According to the World Bank, Switzerland made that transition in just two years, while it took Japan and Sweden four years. Germany and Denmark took six years, and the United States took nine years.

The Korean central bank cited a weakened Korean won against the U.S. dollar as the primary reason behind last year’s decline.

“The Korean won’s exchange rate had a huge influence on the GNI decline,” said Jeon Seung-cheol, head of the central bank’s economic statistics department. “Last year, the average won-dollar exchange rate was 1,131.5 won, which was a 7.4 percent devaluation compared to the previous year’s 1,053.2 won.”

Personal gross disposable income per capita, which measures how much a person can freely spend after paying taxes and other expenses including debt, fell 2.5 percent year on year in dollar figures to $15,524. But when converted to Korean won, it actual grew 4.7 percent from the previous year to 17.6 million won.

However, the report admitted the foreign exchange rate was not the only cause of the shrinking per capita income.

Last year, the economy grew 2.6 percent, a 0.7 percentage point drop from the previous year’s 3.3 percent growth and the slowest expansion since 2012.

The overall investment rate retreated from 29.3 percent the year before to 28.5 percent. This was the lowest investment rate in 17 years. The last time investments were so low was in 1998, at 27.9 percent, when the country was under a debt workout program by the International Monetary Fund.

One thing that rose was savings. Overall savings rose nearly a percentage point from 34.5 percent to 35.4 percent, indicating that people are spending less.

This year, the situation is likely to be similar or worse.

At the start of 2014, President Park said she would usher in an era of $30,000 per capita national income in three years through the government’s three-year economic reform plan.

That does not seem likely. While Middle East respiratory syndrome contributed to holding back the economy last year, this year, the economy is in low gear even without that kind of unexpected factor.

“This year, the economy is expected to expand at a similar level of last year’s 2.7 percent, and actual economic growth momentum is expected to further decline,” said Lee Geun-tae, a senior analyst at LG Economic Research Institute.