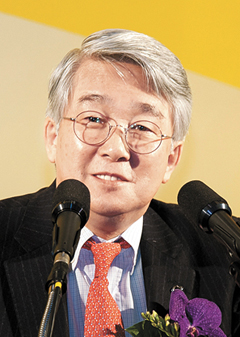 Park Dong-hoon, the incoming CEO of Renault Samsung Motors, vowed on Friday to propel the country’s smallest domestic automaker to the No. 3 spot by next year at the latest. He also set a goal of selling 100,000 vehicles by the end of this year.

“I’m positive that Renault Samsung will make it to third in the domestic automotive market by this year, or at least by next year if late,” Park said at an inaugural media event held at Sheraton Seoul D Cube City Hotel in Guro District, southwestern Seoul.

Park, who will take over as CEO on April 1, was confident about catching up with competitors in the sedan segment with its midsize SM6, known as the Talisman in overseas markets. The car hit 11,000 preorders just a month after its release in February. He also revealed the company’s plans to introduce the follow-up model of its QM5 SUV to the local market in the latter half of this year.

Last year, Renault Samsung registered a market share at 4.3 percent, trailing GM Korea’s 8.6 percent and Ssangyong Motor’s 5.4 percent to become the fifth, or smallest, automaker. While the nation’s top two positions in the automotive market are held by Hyundai Motor and Kia Motors, the remaining three automakers have been striving to snatch the No. 3 title.

Another big shift in Renault Samsung’s strategy for this year will be bringing in more models made by mother company Renault to the domestic market.

“The biggest reason we were slow to bringing in cars from Renault was because our initial focus was on cars manufactured in our Busan plant in Korea,” Park said. “But we will bring in more Renault cars and target lineups not provided by local automakers like we did with our compact QM3 SUV.” These models may include Renault’s Clio minicar and Espace minivan.

He said they have plans to launch a new locally developed model since it is important that cars made in Korea are successful in the local market for the company to achieve sustainable growth.

Park, who was vice president of Renault Samsung, is the first Korean CEO to head the company since its establishment 16 years ago.

“My competitive edge as being the first Korean CEO, I think, is the power to encourage employees and make our organization into a more fearless team,” he said. “I want our workers to feel proud of where they’re working, and that mental training is what I will concentrate on.”

His predecessor, Francois Provost, who will be heading Renault China starting April 1, was praised for turning the company around during hard times when the company was financially stricken, especially in the first two years after he took office in 2011.

“Korea is a very important market for the world,” Provost said. “And I [hope] Mr. Park shifts Renault Samsung from a good to a great company.”