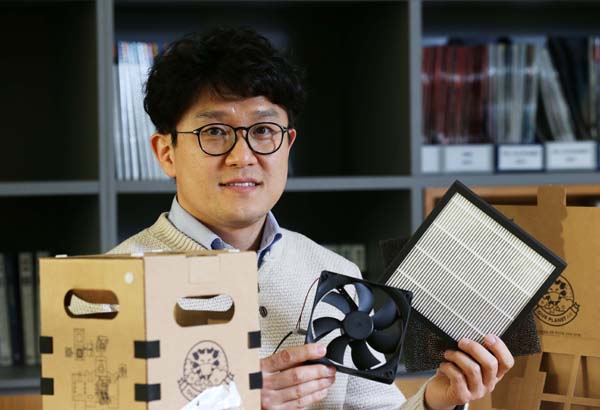 “Society becomes happier when products are sold without the extra price bubbles so that people can afford things that are necessary in life,” says Kim Gwang-il, head of CAC Company. [KIM SANG-SEON]

Inside a box, there are two filters, a fan, plastic bolts, an assembly manual and pieces of cardboard - everything you need to build a stand-alone air purifier for home or office for only 44,000 won ($38).

“Even if you are poor, you should be able to live with clean air,” said Kim Gwang-il, 42, the founder of CAC Company. “This is why I invented the cardboard air cleaner.”

His company specializes in electronic products that use cardboard for their shells rather than metal or plastic, significantly lowering the retail price.

The main components of the Our Planet Air-S air purifier are an electric fan, a prefilter and a high-efficiency particulate air (HEPA) filter. The fan pulls dirty air through the prefilter, which traps big particles, and then through the HEPA filter, which gets more minute particles.

Kim demonstrates how easy the purifier is to put together. He folds cardboard along marked dotted lines and fits the filters and fan inside. Everything is held together with plastic bolts. The purifier is 180 centimeters (6 feet) high and weighs 650 grams (23 ounces).

“Anyone can make it in 10 minutes,” Kim said. “The quality isn’t much different from air purifiers that cost a few hundred thousand won.

“The ‘S’ in the purifier’s name stands for self,” explained Kim. “It means anybody can make it. Because we got rid of the designing cost, we were able to drastically reduce the price.”

Kim’s company has a philanthropic side, too. If a donor wants to buy its filters for charity purposes, the price is reduced to 34,000 won. The company has already sold 1,000 cut-rate versions for underprivileged people residing in places with poor ventilation.

“When fine dust was a big issue two years ago, I was searching for an air cleaner to buy,” Kim said, explaining the genesis of the product. “Prices ranged from a few hundred thousand won to a few million won. They were way too costly and unnecessarily so.”

Kim decided to make his own air purifier using cardboard boxes from a large market.

Kim took out a picture of a project by Shigeru Ban, who won the 2014 Pritzker Architecture Prize, considered a kind of Nobel Prize for architecture.

“He built temporary housing units for victims of earthquakes from inexpensive materials, and this inspired me to design the cardboard air cleaner,” Kim said.

After Kim posted details of his air cleaner on Facebook, he was flooded with requests from acquaintances asking for them. After making about 100 air purifiers, Kim started CAC Company last year.

“The purpose of the company is to make basic electronic products at affordable prices for the poor,” Kim said.

Kim designs electric fans, dehumidifiers and water purifiers from cardboard. He makes videos on how to assemble them, which are uploaded to the company’s website (cardboardartcollege.com).

Last year, Kim volunteered to give lectures on the air purifier in about 20 elementary and middle schools in Incheon.

Kim’s next goal is to design drones and robots made from cardboard.