Tire-tread shoes by start-up take off

Tire-tread shoes by start-up take off 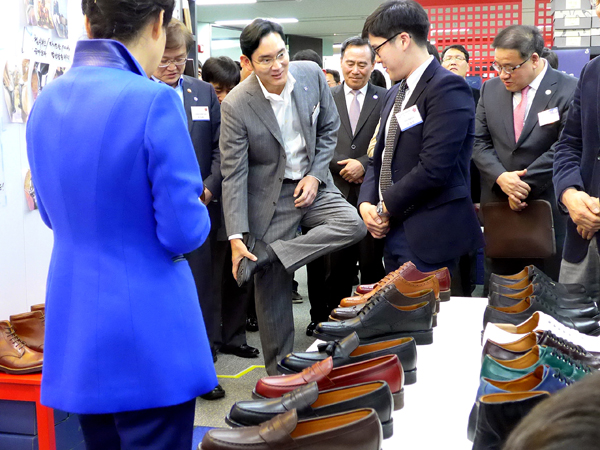 Lee Jae-yong, the vice chairman of Samsung Electronics, tries on a pair that he eventually bought.

On March 10, Samsung Electronics Vice Chairman Lee Jae-yong was visiting the Daegu Center for Creative Economy and Innovation, which was built by Samsung and the Daegu Metropolitan Government to help start-ups as well as small and medium-size enterprises in the area.

Lee spotted an unusual product showcased at the center: a pair of shoes with tire rubber on the bottom. After trying them on, Lee forked out 189,000 won ($160) and bought a pair right on the spot.

He also gave a gift to Lee Kyung-min, 29, head of the Brusher Shoes Company, which made the shoes: a Galaxy S7 smartphone.

Lee Kyung-min described the encounter with the heir-apparent of the Samsung empire on social media and even uploaded a picture of his new phone.

Overnight, his shoes were a phenomenon on the Internet and had been given a new name: “Lee Jae-yong’s Shoes.” Sales of the distinct shoes, which were at about 10 pairs a day, skyrocketed to around 100. Daily visitors to the company’s online shop went from 30 to more than 3,000. 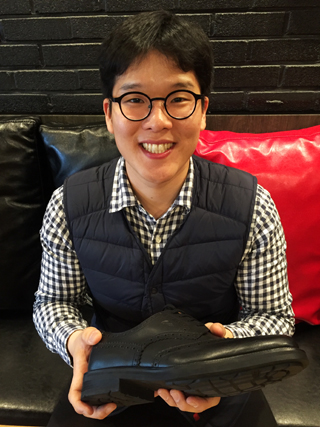 Shoes made by Lee Kyung-Min, head of the Brusher Shoes Company, are less slippery on wet surfaces thanks to soles made from tire rubber, complete with tire patterns.[BRUSHER]

The shoes’ soles are made of tire rubber, complete with tire patterns. As on a car, the patterns are designed to prevent slips. They also make it easy for owners to see how worn down the soles have become.

The presidential security office of the Blue House and Daegu police have ordered the shoes. People from Ulsan, Pohang and Busan went all the way to the company’s office in Daegu to try them on.

Last Friday, the company signed an agreement to trademark the shoes under the name Lee Jae-yong’s Shoes and sell them in an online shopping mall run by the government’s Public Procurement Service, hoping for more sales to government branches.

Lee started the Brusher Shoes Company out of pure curiosity. Lee, who studied commerce at Daegu University, came up with the idea of using tire rubber on shoes to reduce slipperiness.

Lee visited tire manufacturers to learn about the patterns and materials of different tires.

“Although I had the idea, I lacked the technology and skills to make the shoes,” Lee said. “After inquiring with different people, I met a craftsman who made shoes for former presidents.”

The craftsman Lee found, who requested not to be identified, used to work for a famous shoe company based in Seoul but is retired now. He made shoes for former Presidents Chun Doo Hwan, Roh Tae-woo and Lee Myung-bak.

With that know-how, Lee was able to start his company and move into the Daegu Center for Creative Economy and Innovation.

From each sale of a pair of shoes, Lee sets aside 3,000 won. He is planning to use that money to help underprivileged people in some way.

“My goal is to sell 3,600 pairs by the end of this year,” Lee said. “By selling more, I want to make a small contribution to society.”