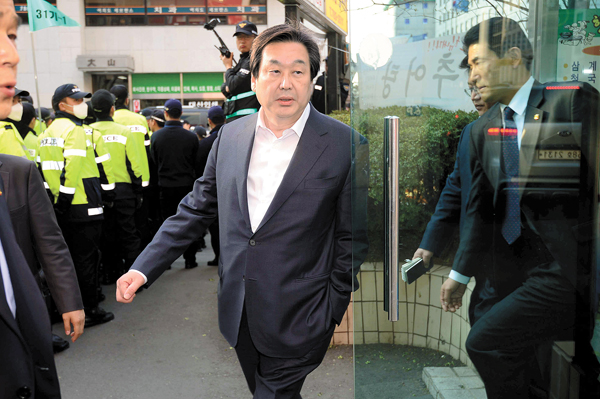 Retracting a bombshell decision from Thursday, the ruling party’s chairman agreed Friday to allow two former ministers of the Park Geun-hye administration to run in next month’s general election.

But Chairman Kim Moo-sung refused to endorse three other Park loyalists, effectively barring them from running for the party.

Just hours before the candidate registration deadline, Kim approved former Home Affairs Minister Chong Jong-sup as the nominee for Daegu’s Dong A District and Choo Kyung-ho, former minister of government policy coordination, as the candidate for Dalseong County in Daegu, the former constituency of President Park herself.

He, however, refused to endorse Lee Jae-man, the former Daegu Dong District head selected to run in Daegu’s Dong B District. Yoo Yeong-ha, a former member of the National Human Rights Commission nominated for Seoul’s Songpa B District, and North Korea rights activist Yu Jae-gil, named to run in the Eunpyeong B District of Seoul, were also rejected by Kim.

The chairman’s rejection effectively barred the party from contesting the three constituencies in the April 13 general election. The nominees are barred from running at all because the deadline to leave the party to run as independents expired on Wednesday.

As a result of Kim’s move, three Saenuri Party members left the party Wednesday to run as independents because they were not given tickets due to perceived disloyalty to the president. They will face no ruling party competitors in their constituencies.

Rep. Yoo Seong-min will face no conservative rival in Daegu Dong B District. The same situation faces Rep. Lee Jae-oh in Seoul’s Eunpyeong B District and Kim Young-soon, former Songpa District head, in the Songpa B District of Seoul.

“It was a difficult decision to mend the rupture in the party and prevent a catastrophe,” Kim was quoted as saying by his chief of staff, Kim Hak-yong. “Because of the unjust nominations, the party was on the brink of crushing defeats in the capital region. As chairman of the party, I challenged the wrongful decisions of the nomination committee and ensured that the party won’t contest three districts where it had made clearly unjust nominations.”

A war broke out between Kim and allies of the president Thursday when the chairman challenged its selection of candidates for five districts. Tickets for all five constituencies were awarded to loyalists of President Park earlier this month.

In a surprise press conference Thursday, Kim made the bombshell declaration that he was rejecting the five candidates. The deadline for official candidate registration with the National Election Commission was 6 p.m. on Friday, and the Supreme Council started a meeting in the morning to find a compromise. Kim, who left for Busan following his press conference on Thursday, was pressured to return to Seoul and host the meeting at 11:30 a.m.

Around 4 p.m., the Supreme Council struck the deal to save two of the five candidates.

In a related but separate development, the Supreme Council also deliberated another controversial candidate selection on Friday.

After the party nominated Lee In-seon, former North Gyeongsang vice governor, to Suseong B District, Rep. Joo Ho-young, who has represented the constituency for the past 12 years, challenged the decision and filed an injunction, saying the nomination process was invalid because there was no public application process. The Seoul Southern District Court granted the injunction on Wednesday, but the Saenuri Party nominated Lee again after receiving applications for the public for one hour.

After Joo left the party to run as an independent, Kim delayed his endorsement of Lee’s nomination. But on Friday, Kim backed down and approved Lee as the party’s nominee.

The Blue House remained tight-lipped about the turmoil in the ruling party over the past few days. Park broke her silence Friday and made a comment. “North Korea may stage a provocation at any time,” Park said in a speech at the opening ceremony of the Northern Gyeonggi Provincial Police Agency in Uijeongbu. “Under such circumstances, the National Assembly and politicians must stop practicing selfish politics and show patriotism to protect the people’s lives and property and defend the country from a crisis.”

Her comment came as the Supreme Council was having a meeting.

“It is related to Chairman Kim’s resistance,” a Blue House official told the JoongAng Ilbo.

Amid the ruling party’s nomination crisis, the approval rating of President Park plunged to the lowest level since the Middle East respiratory syndrome outbreak last summer.

According to Gallup Korea, Park’s approval rating, surveyed from Tuesday to Wednesday, was 36 percent, 4 percentage points down from the previous week. The figure was the lowest since the third week of last August. More details about the poll are available at the National Election Commission’s homepage.

Although the nomination war between Kim and Park’s loyalists ended with compromise and cease-fire on Friday, Saenuri Party sources said the battle will resume as Park’s term nears its end. A power struggle to win party control among presidential contenders is not uncommon, and the party is expected to be split by presidential hopefuls from different factions.

“Because the general election is imminent, the party will continue the campaign under the Kim leadership,” said a centrist lawmaker representing a capital district. “But the contest for the next presidential election has already begun, starting with the July party convention to elect new leadership.”

Kim associates said the chairman, who has a history of challenging the president only to retract the challenge later, managed to turn around his image with this week’s tough and high-profile moves. “Although he may look like he’s made a compromise again, the political gain for him is still there,” a Kim aide said, referring to his accomplishment of protecting key Park adversaries - Reps. Yoo and Lee.

“It’s very meaningful that Kim, on his own, took over the central role of the ruling party,” a Saenuri lawmaker told the JoongAng Ilbo.

Park loyalists, however, condemned the chairman.

“This crisis came about because Kim wanted to play the hero,” a senior lawmaker close to Park told the JoongAng Ilbo. “The administration has little time left to complete its tasks, and Reps. Yoo and Lee will likely obstruct its work.”