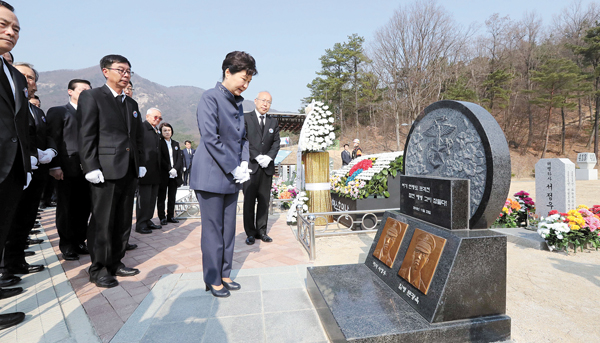 President Park Geun-hye pays respects at Daejeon National Cemetery on Friday for the first West Sea Defense Day. The fourth Friday of March is now a national day to remember those who died defending the country against North Korea’s provocations. [JOINT PRESS CORPS]

To commemorate those who died defending the country during military provocations by North Korea, South Korea marked its first West Sea Defense Day on Friday in Daejeon.

West Sea Defense Day will fall on the fourth Friday of March every year and is meant to remember the fallen in the Second Battle of Yeonpyeong in 2002, the sinking of the Cheonan warship in 2010 and the shelling of Yeonpyeong Island in 2010.

President Park Geun-hye, opposition leaders from the Minjoo Party of Korea and the People’s Party, military officers and families of the deceased were present at the ceremony at Daejeon National Cemetery.

“Commemoration events in regard to the North’s provocations can only be held for five years on the national level,” a Ministry of Patriots and Veterans Affairs official said. “After five years, the Navy and Marine Corps continue to hold commemoration events, but things die down after a while.

“The commemoration day to remember the dead from North Korean provocations has been declared a national day so that what happened will not be easily forgotten,” the official added.

President Park spoke with the families of the deceased.

“Feel proud for your father who passed away while protecting this country bravely,” Park told Kim Hae-gang, the second daughter of Kim Tae-seok, a master chief petty officer who died in the Cheonan sinking.

“And know that he is always watching out for you,” she added.

Park later addressed the public with a speech emphasizing that South Korea will not go easy on the North.

“South Korea will not be shaken by any threats from North Korea,” she said. “The North is currently in a state of deep isolation, and the possibility that it may conduct another provocation is the highest it has ever been.

“I hope that today, as we begin to observe West Sea Defense Day, we will all make a commitment to hold fast together in our will to protect the nation,” she added.

The joint U.S.-Korea military exercise Foal Eagle, which is planned to last into April, also continued on Friday.

“We prepared an exercise to remember the dead who died protecting the Northern Limit Line at the West Sea and to show that Korea and the United States are ready to respond at any time to any provocations from the North,” a Navy official said.