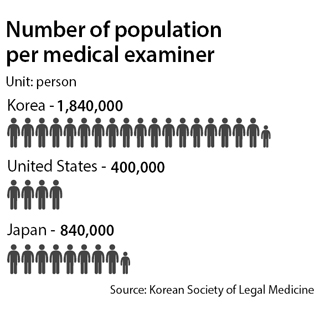 When Mr. Lee plowed into an 8-ton cargo truck parked on the shoulder of the Gyeongbu Expressway, he fractured a rib but survived because he was wearing his seat belt. His Cambodian wife, who was pregnant, was not. She died on the spot.

Police would have considered the case a tragic accident and closed it had it not been for 26 life insurance policies taken out on Lee’s wife. Lee was set to receive billions of won from the insurance companies. Suspecting murder, police inspected the car and discovered nothing.

But in the dead wife’s blood, they found traces of a sleeping pill.

Lee was charged with murder. But an autopsy on the wife was impossible: she had been cremated. The test on the blood wouldn’t stand up in court.

Lee walked away a free man.

“Had an autopsy been done, they would have found the exact cause of death and whether the man had an intention to murder his wife,” said Yoo Seong-ho, a professor in the medical examination department at Seoul National University’s College of Medicine.

“Deaths from traffic accidents are often assumed to be accidents, and no one considers the possibility of suicide or murder attempts.”

Autopsies would get to those truths. And yet, autopsies are uncommon in Korea, with only about 18 percent of unnatural deaths receiving proper autopsies by medical examiners.

Until last year, Korea did not stipulate on-site postmortem examinations by medical examiners in cases of unnatural deaths. Police and crime scene investigation teams would get to the scene first, and medical examiners would often see the bodies after they arrived at the hospital, or not at all if police or prosecutors did not consider it necessary.

But with a shortage of medical examiners, such a project has not been implemented nationwide.

Korea has 51 medical examiners, 28 of whom work at the NFS, 13 who are working at medical schools and 10 working in private clinics.

The government proposed last year to increase the number of medical examiners by 10 every year for the next four years. But fewer than 10 doctors have expressed interest in becoming a medical examiner so far, according to the Korean Society of Legal Medicine.

The police admitted to errors in their records.

Being a medical examiner in Korea has never been easy.

“When I started in 1990, there were only four medical examiners in the country,” said Lee Han-young, a veteran medical examiner at the NFS. “I don’t mind facing dead bodies as I used to back then, but my family is definitely unhappy when I’m on call for 24 hours a day to perform postmortem tests.

“We have a responsibility as human beings to make sure unfair deaths are not covered up as mere accidents.”