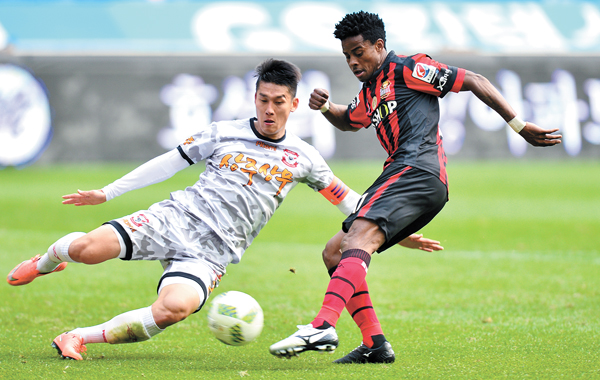 FC Seoul striker Carlos Adriano de Sousa Cruz has had a superb year so far and his prowess in the pitch has caused quite the commotion.

The 28-year-old Brazilian scored nine goals in the 2016 Asian Football Confederation (AFC) Champions League group stage to top the scoring chart of the competition and netted one in Korea’s K-League Classic.

He has been named Toyota Player of the Week in the AFC for three straight weeks and picked as the weekly MVP of the K-League in the second week of the season. His lethal attacks have helped Seoul top Group F in the AFC Champions League.

Among the reasons behind his brilliance, Adriano credits Brazil’s football legend Romario de Souza Faria as his greatest influence and the motive behind his dream to become a footballer.

Romario’s explosiveness in front of goal allowed Brazil to win its fourth World Cup title in 1994. He was named MVP of the World Cup and FIFA player of the year.

Adriano’s relationship with Romario goes back to 2009 when the two met in Brazil. Although one was a director and the other a player, they were seen to be like father and son. Romario also helped Adriano personally develop his talent as a striker.

Ilgan Sports, an affiliate of JoongAng Ilbo, conducted an interview with Adriano on March 18 to discuss how his relationship with the Brazilian football legend has shaped his career.

Q. Can you elaborate on your special relationship with Romario?

A. Since I was little, Romario was my idol. Many Brazilians start playing football inspired by Romario. I was the same. Then, when I played for America Football Club from 2009 to 2011, Romario was the director of the club. Simply being in his presence was an honor for me.

A son finds comfort in his father’s presence. That was how I felt when I was with Romario. He treated me like his own son. He often took time to personally instruct me in the sport and how I should play. What an honor for me. He is my second father who has helped me to improve as a player. He has shaped who I am today. I am grateful for that.

Don’t you wish to play for the Brazilian national team like Romario did?

Any football player aspires to represent their country. I am the same. There are many footballers in Brazil and to them, being on the national squad is a great honor. However, considering the current circumstances I am in, it would be difficult to play for my country. The Brazilian national team would not know much about me playing in Korea right now and it would be difficult for me to grasp what sort of talent the team is looking for.

How is your relationship with Seoul manager Choi Yong-soo?

The manager tells me a lot of good things. He’s open to have private discussions with me whenever I inquire. He tells me to focus in the game and sacrifice myself for the team and I try to follow his guide. I realized the more I play selflessly, the better I play personally as an individual and as a team member.

Do you have a father-like figure in Korea?

Seoul’s first team coach Adilson dos Santos is a father-like figure to me here in Korea. He took good care of me when I first came to Seoul. He is also a Brazilian and we actually come from the same town, so there is a mutual connection between us. Coach Santos is what captivated me about the life, training and the team here in Seoul.

You played for Dalian Shide in the Chinese Super League from 2011 to 2013. Some fans say you will re-join a Chinese club that offers high salaries. Do you have any intention to return?

My heart is with Seoul right now. I am satisfied with how things are at the moment. Since the moment I got here, my goal was to win the trophy with a Seoul uniform on. My loyalty lies with Seoul until the end of my contract. Honestly, I wish I could extend my contract with the team if the situation presents itself. I want to stay here as long as possible. About joining a high-paying Chinese club, I have no intention of leaving Seoul until I accomplish my goal.