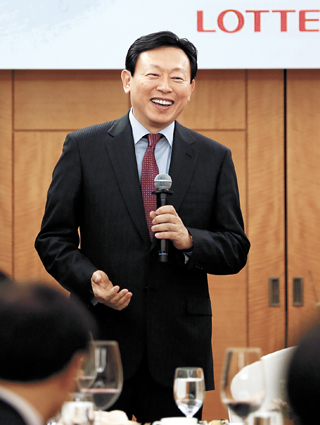 The fate of Lotte Group hung in the balance several months ago, as the fraternal battle over control of the retail giant reached its peak.

However, a year into the family battle, Chairman Shin Dong-bin managed to settle the dispute and strengthened his grip over the country’s fifth-largest conglomerate, which has operations in Korea and Japan.

Most shareholders of Lotte Holdings in Japan voted in support of the younger son, who heads both the Japanese and Korean operations, despite efforts by his older brother, Shin Dong-joo, to oust the chairman as CEO of the Japan-based unit.

In the second shareholders meeting on March 6, Shin Dong-joo even suggested that he would give 2.7 billion won ($2.3 million) worth of shares to members of the association of Lotte Holdings workers - the second-largest shareholder after Kojyunsya, with a 27.8 percent stake - should he win the vote. But the agenda failed to win a majority of shareholders’ votes, and the meeting finished only in about 30 minutes.

“We figured that the meeting’s result shows firm support for the chairman, and the succession battle has actually ended,” a Lotte Group spokesperson said.

Shin Dong-joo may have used up most of his maneuvers to nullify the leadership of Shin Dong-bin, though the result of a lawsuit to determine the legitimacy of Shin Dong-bin’s reign at Lotte Holdings has yet to come.

As the highly publicized feud appears to be coming to an end, Chairman Shin Dong-bin is seeking to revamp the group through three key initiatives: corporate restructuring, global expansion through mergers and acquisitions, and empowering female executives.

Cleaning up the corporate structure

Of all things, the chairman placed the improvement of Lotte’s corporate structure high on the agenda since the fraternal battle exposed an opaque governance structure and the founding family’s strong hold over the group.

Founded in 1948 in Japan, Lotte has gone from a small chewing-gum maker to a major business unit with interests encompassing retail, chemical and car rental services. Today, Lotte Group has a total of 86 affiliates with annual sales hitting 81 trillion won. Still, only eight affiliates, or 9.9 percent, are listed on the Kospi market, making credible information on the unlisted units hard to come by. This type of backward system is linked with founder Shin Kyuk-ho’s business principle that keeps most of the businesses unlisted.

The feud and ensuing investigation revealed that a handful of unlisted units based in Japan - with obscure functions and business areas - are at the top of the corporate governance structure. 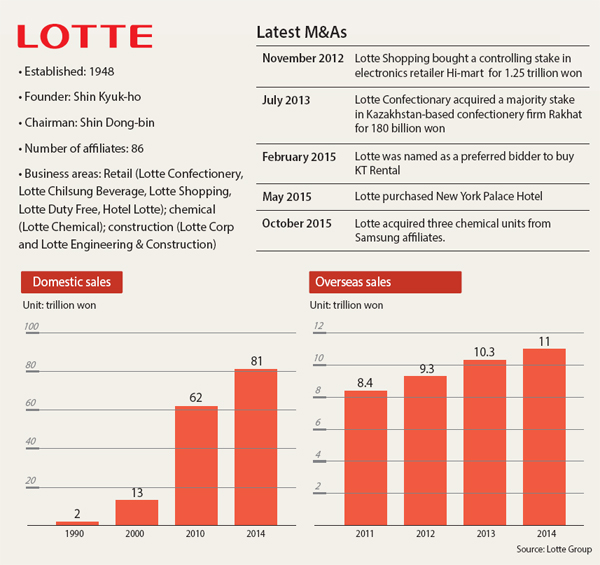 Chairman Shin Dong-bin is trying to fix the system through the listing of key Lotte affiliates.

The first target is Hotel Lotte, the de facto holding company of Korean Lotte affiliates. Lotte Group said last year that it will take the hospitality operator public in the first half of this year. The hotel unit passed a preliminary screening for its planned initial public offering (IPO) in January, according to the Korea Exchange.

After the group’s core affiliate goes public, more affiliates, including some of the Japan-based Lotte units, as well as Lotte Data Communication Company, Korea Seven and Lotteria, are expected to go public, according to the Korea Exchange.

Alongside the IPO efforts, the business tycoon has sought to ease the group’s complex cross-shareholding system by purchasing shares of key Lotte units at the center of the cross-holding web.

Last year, the chairman acquired a 1.3 percent share in Lotte Confectionery, which was held by Lotte Construction & Engineering.

The move cut Lotte’s cross-shareholding links by 34 percent from 416 to 276, and the number has since been further reduced to 67, according to Lotte Group and a report from the Fair Trade Commission.

To speed up structural governance reforms promised by the chairman, the group launched a task force last year that will be entirely focused on a structural overhaul. Lee Bong-chul, head of the group’s support department, leads the team.

Another area of focus by the chairman is business expansion through different mergers and acquisitions. When he took the helm at Lotte Group, Shin Dong-bin clinched a number of big deals to acquire different units, including electronics store chain Hi-Mart, car rental service operator KT Rental and a liquor unit of Doosan Group.

Most recently, he has set his sights on the global market beyond the Asian continent.

But the purchase of the landmark hotel was only part of Hotel Lotte’s broader efforts to extend its properties.

Song Yong-dok, CEO of Hotel Lotte, said last year that the hospitality chain will acquire 33 more hotels outside of Korea by 2020, a move to become an international hotel chain.

The CEO specifically cited hotels in Los Angeles, Chicago, London, Paris and Frankfurt as potential bases for new hotels in the coming years.

The CEO’s interest reflects the hotel operator’s intention to further move into European and U.S. markets, since the unit’s global operations currently center on Asian countries such as Vietnam and Uzbekistan and other regions such as Russia and Guam.

Five months after the hotel purchase, Lotte announced the largest acquisition deal to date in the conglomerate’s history.

Lotte Group agreed to buy a sizable stake in Samsung’s petrochemical units for around 3 trillion won, extending its business beyond retail and hotels.

Under the deal, Lotte Chemical will absorb the businesses of the new units.

“Lotte Chemical, which specializes in basic petrochemical materials and synthetic fibers, has been on the lookout to include future-oriented chemical businesses and products to create synergies with existing products,” the group said.

When the deal is completed in the first half of this year, the Lotte affiliate is expected to boost its competitiveness in plastic materials such as polycarbonate, acrylonitrile butadiene styrene and polystyrene, where Samsung’s chemical units are strong.

The group also looks to bolster its presence, with the surging population in high-growth markets in Southeast Asia, including Vietnam and Indonesia.

Big C is the second-largest supermarket chain in Vietnam, and also operates in Thailand and Laos with 600 stores. The extensive retail network of the discount chain will help Lotte cement its position in the Southeast Asian market.

Groupe Casino’s sale of its Vietnam units attracted multiple bids in Asia, including offers from Thai tycoon Charoen Sirivadhanabhakdi and Japan’s Aeon as well as Lotte.

The value of the deal is estimated to be over $ 1 billion.

Also joining the bid are Central Group, Thailand’s biggest retailer, and Vietnamese companies Co.opmart and Masan Group, according to reports in the Wall Street Journal.

Another region that draws Lotte’s interests is Russia, with its enormous potential in untapped natural resources and land.

The group recently established farming and logistics networks along the Black Sea and Maritime Province.

The move is expected to create synergies with the existing Lotte Confectionery plant in Kazakhstan.

“The chairman pays attention to the region because the current economic slowdown in Russia could translate into benefits for those interested in investment in the region,” said a source at Lotte Group who declined to be named. 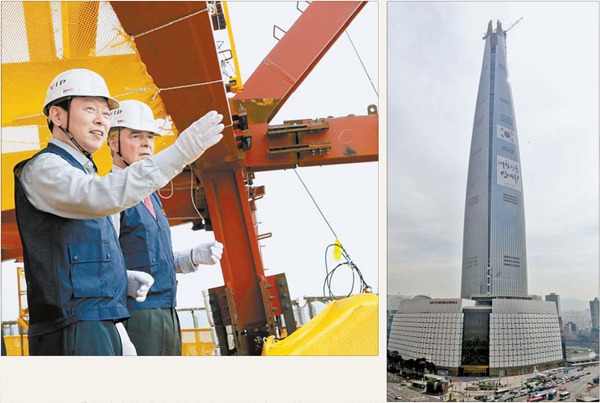 Chairman Shin Dong-bin has reiterated that increasing the number of female workers and executives is one of his priorities.

The group openly said that its affiliates should hire more women to enhance gender diversity.

Now, the proportion of new female workers accounts for 35 percent, and the company plans to increase the ratio to 40 percent.

“We have many customers who are women,” Chairman Shin Dong-bin said during a meeting with female executives at Lotte affiliates last year. “And I am sure that women know best what women really want, so hiring more women workers and putting them in executive posts is one of the most important tasks for Lotte.”

Empowering women workers has emerged as a major social issue, as few women are found at the senior level of big companies.

In Korea, women represent a miniscule 1.9 percent of board directors, according to a GMI Ratings survey.

The ratio puts South Korea at the bottom of the ranking out of 45 countries surveyed.

The chairman has set the target of filling 30 percent of its executive posts with women.

“Following the direction of Chairman Shin Dong-bin, we have been focused on hiring women since 2006,” a representative of Lotte Group said. “Now, 11 percent of senior workers, whose rank is above senior manager, consist of women. But we will expand the proportion to 30 percent by 2020.”

At the end of last year, Lotte announced the promotion of two women to executive positions.

At the time, the company appointed its first female executive to have risen through the ranks from an entry-level employee and also the first non-Korean female executive.

“We don’t want to just say that we want more women,” the representative said. “Our efforts will be shown in numbers by hiring and promoting more women.”