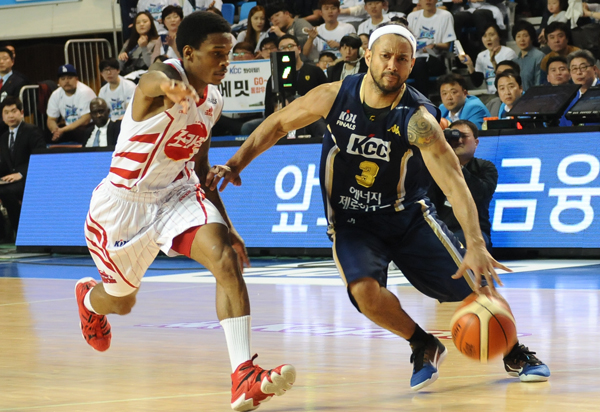 Jeonju KCC Egis is due to play Goyang Orion Orions in the sixth game of the Korea Basketball League championship tonight in pursuit of a trophy that has evaded them for 14 years.

Egis was at the verge of losing the championship title to the Orions until Sunday when the team finally won the fifth game after three straight defeats.

Although Andre Emmett’s 38 points and nine rebounds were without a doubt the driving force behind the Egis’ 96-88 victory, there were other talents in the Egis roster that resuscitated the team’s chance at the KBL trophy, namely Chun Tae-poong and Song Kyo-chang.

Regular season champions Egis initially claimed the higher ground in the finals when it clinched the first game of the series. In KBL history, 73.7% of teams that won the first round became the champions of the respective season. But, Egis lost their swagger when they lost the next three games to the Orions, losing the second and third round games by more than 20 points.

With Emmett tightly contained by the Orions, other players, including Ha Seung-jin, were unable to match the points that Emmett would have scored, which became evident in the third game when no player other than Emmett scored more than 10 points.

After the heartbreaking defeat in the fourth round, the likelihood that the Egis would take the trophy fell to almost zero. No team in the history of KBL has come out of a 1-3 record in the final series to claim three straight wins in the remaining rounds and then win the title.

But the Egis were not prepared to let unfavorable odds get the best of them.

Chun came to the rescue for the troubled Egis first. Six minutes into the game, he drained a long shot beyond the arc, only to add another one three minutes later. In the previous three games, Chun’s scoring did not make a huge impact, never scoring more than 11 points.

However, Chun scored 11 points in the first quarter alone on Sunday to pull ahead of the Orions. Even in the decisive moment in the fourth quarter when the Orions caught up with Egis, Chun calmly added four points on the board, including two free throws, to lift Egis out of the predicament.

Chun concluded Sunday’s game with 20 points, five rebounds and three assists. Essentially, it was Chun who fortified the Egis offense when Emmett was curtailed by the Orions’ intense defense.

Another hidden hero of Egis was rookie Song. Song received the spotlight in October 2015 during the KBL draft when he was picked in the first round by the Egis straight out of high school. The 19-year-old forward also faced criticism that he might lack the necessary experience to play in the pros.

But, Song silenced all the concerns on Sunday. His worth was demonstrated when he came out of nowhere and jumped over other players to tip in a basket in the fourth quarter with only one minute remaining in the game, while Egis led the Orions by merely two points.

Song’s explosive effort did not stop there. With three seconds left in the game, Song slammed one into the basket to rile up the spectators and declare the Egis’ win. Although the basket didn’t count since the dunk happened after a foul, it was sufficient for Jeonju fans to go wild.