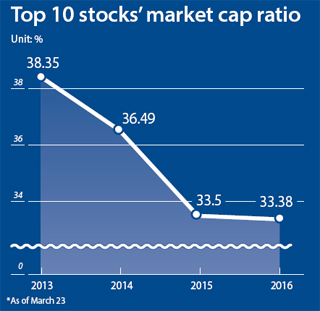 The market cap ratio of the benchmark Kospi’s top 10 stocks has once again nudged down, continuing the decline of recent years.

Most of the top 10 companies on the Seoul bourse are exporters and as Korean outbound shipments have been steadily falling, investors have been offloading their stocks in the companies, further pushing down market capitalization.

According to the stock market main operator Korea Exchange on Monday, the total market capitalization on the Seoul main bourse Kospi as of Wednesday last week rose to 1,264 trillion won ($1.08 trillion). This is 1.71 percent up from the 1,243 trillion won made at the end of last year.

The increase in market capitalization was largely due to major companies like Samsung C&T and Hanmi Pharmaceutical going public.


The market capitalization of the top 10 companies has also gone up from 416 trillion won to 422 trillion won during the same period, which is a 1.44 percent increase.

Market analysts say that the market capitalization ratio of the top 10 companies has shrunk largely because of sluggish exports, which has recorded the longest decline since it started to fall in January 2015.

Among the top 10 companies by market capitalization today, seven, including Samsung Electronics and Hyundai Motor, are major exporters.

“The Kospi bourse’s market capitalization often changes depending on how those super-large cap shares like Samsung Electronics and Hyundai Motor perform, which are heavily export dependent,” said Larry Kim, an analyst at Hana Financial Investment.

“For a while, the top large-cap shares will stay on high demand as their stock prices nowadays are cheaper than before,” Kim said. “As the price advantage can’t be a sustainable factor for investors, the fate of top companies - mostly heavy exporters - will be determined whether they can show a meaningful sign of growth.”

Samsung Electronics still remains the biggest influential stock on the Kospi with 185.5 trillion won as of Wednesday last week. This accounts for nearly 15 percent. However, when compared to 2013, its market capitalization ratio has declined from 17 percent. The market capitalization of the Korean smartphone manufacturer has dropped more than 8 percent.

Even Hyundai Mobis and steelmaker Posco, which are also major exporters, have seen their ranks being pushed down. Posco, which ranked fourth, is no longer even included on the top 10 lists.

As with Kepco, other companies that have a large reliance on domestic business or sales in China saw their market capitalization increase.

One of the companies that newly joined the top 10 lists this year included cosmetic company AmorePacific who has been enjoying a significant increase in its share values largely due to the large popularity of Korean beauty products in the global market including China.

Today it ranks eighth on the Kopsi with 22.3 trillion won. Another newcomer is Samsung C&T that went public in September last year. It now ranks fourth on the Kospi.