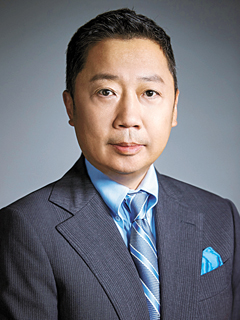 Doosan Group, a troubled machinery and construction conglomerate, has ushered in its new leadership as Park Jeong-won, the eldest son of former Doosan Group Chairman Park Yong-kon, officially took over the group on Monday.

The new chairman pledged to complete the ongoing financial restructuring aimed at raising capital in a push to cushion the ballooning losses of key affiliates including Doosan Heavy Industries & Construction, Doosan Infracore and Doosan Engineering & Construction.

“We’ve made a strong base for stable business management through the reorganization of business assets and liabilities,” Park said during an inauguration ceremony at the Doosan Leadership Institute in Gil-dong, eastern Seoul.

“We will create a sound financial structure by successfully finishing the remaining work.”

Doosan Bobcat, a U.S.-based affiliate of Doosan Infracore, has signed a deal giving its authority to buy and sell the company’s shares to JPMorgan and Korea Investment & Securities in the process of floating the company on the Korean stock market between August and September.

Doosan Infracore, a machinery manufacturer, also sold off its machine tool business unit to a private equity fund in a deal worth 1.13 trillion won ($967 million).

Doosan Infracore is considering divesting other non-core assets, such as its French unit, while Doosan Group has put Doosan DST, a defense affiliate, up for sale.

But it remains to be seen whether the maneuvers are enough to offset the huge losses made by Doosan’s key units.

Doosan Infracore currently carries over 5 trillion won in debt, affected by a prolonged slump in the construction sector, as a slowdown in the economy has either delayed or canceled big infrastructure projects in regions such as China and the Middle East.

The market conditions have also dealt a huge blow to other affiliates, including Doosan Heavy and Doosan Engineering & Construction, with combined annual net losses by all Doosan affiliates amounting to 1.7 trillion won last year.

“[Doosan] will become the No. 1 player in the fuel cell industry,” he said, “and we will develop the duty-free business into a new growth engine through heavy investment.”

Doosan Group was chosen as a new operator to run a duty-free store in its Doosan Tower building in Dongdaemun, a popular fashion district in central Seoul.

Another area of focus was creating a corporate culture that carries the voices and views from workers in the field.

“If [a worker or business unit] spots an opportunity on site, we need to take action as soon as possible, because that defines success in the fast-changing business landscape,” he said.