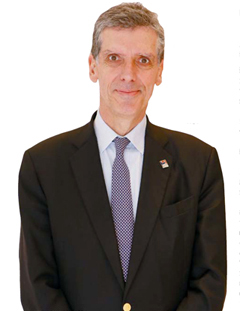 France has formed diplomatic ties with many countries, but it has never celebrated an anniversary on such a scale.

France launched the “Year of Korea” last August and has since been holding a series of cultural and academic events, while Korea also kicked off the “Year of France” on Wednesday, which will be filled with hundreds of similar events through December.

The reason France is dedicating a whole year to Korea, according to Henri Loyrette, co-chair of the event committee, is because “Korea is a very important country in terms of economics, but has a lot to share culturally as well,” insisting that such cultural exchanges should continue beyond the event.

A former director of the Musee d’Orsay and president of the Louvre Museum, Loyrette was appointed as the French chair of the joint preparatory committee about two years ago and has been working to show the French there’s more to Korea than K-pop, while showing Koreans the hidden jewels of France.

“So I think this kind of manifestation is important, of holding year-long events of exchanges where we continue to communicate and consider together what we can work on together in various fields, not only in culture but also in economy, politics, gastronomy and tourism and so on.”

To learn more about cultural exchanges taking place between the two countries, the Korea JoongAng Daily sat down with Loyrette at Hotel Silla in central Seoul on Wednesday. Here are some edited excerpts.

Q. Many cultural programs for the “Year of Korea” in France seem to have received great responses from the French people - both young and old. How is it going?

A. There are many things France and Korea share. We are both ancient countries with deep civilization but also looking to what’s coming in the future. We don’t only treasure the past but focus on what’s coming ahead and what’s happening now. Also for cinema, both Korea and France are two important countries for global cinema. We have the Cannes Film Festival and you have the Busan International Film Festival. Through BIFF, you not only support Korean films but also look abroad and support a lot of Eastern movies. Without these festivals, world cinema wouldn’t be what it is now. Something that’s important for France, I find is also important in Korea.

It must have been quite difficult for you to get all the institutions in France to come together and focus on Korea. Was it?

These kind of exchanges are quite interesting because it came very naturally without any effort. We didn’t say, “We have to do something,” or, “We have to find the right people to do something.” I remember that when we were planning the Korean season in France, I went to all the French institutions asking if we could do something with Korea in partnership and everyone agreed. It’s true that for us, Korea is quite a new country in a way. We have a long-term relationship with Japan and Europe, and from this point of view Korea is quite new, and new means exciting and fresh.

What are the hidden jewels of France that you would say Koreans don’t know about yet, and vice versa?

France is a small country but a diverse one, too, from the north to the south. Even geographically, it’s completely different. Other than Paris, the other provincial cities of France are the hidden jewels. France in terms of nature, for example, is a country which is very well preserved. In some parts of France it’s still quite empty. So nature is very strong, powerful and beautiful.

Meanwhile, what is striking about Korea is the mixture of both old and new - the capacity of being completely contemporary but without neglecting the past. That’s what we are trying to show during the “Year of Korea” in France, that Korea is not only Seoul. We try to show that Korea is not only about K-pop and we believe one of the successes of the Korean season in France is that French people were able to discover all of the Koreas.