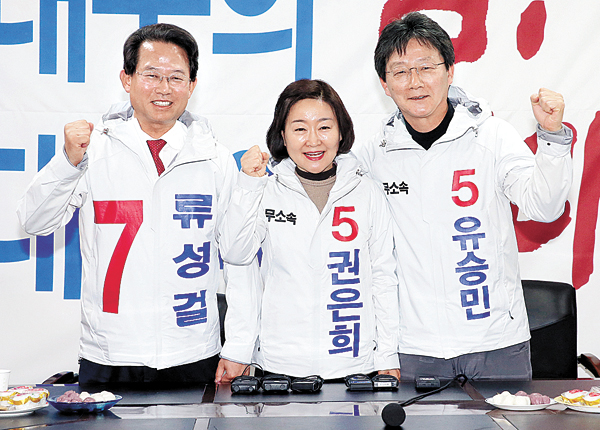 At Yoo Seong-min’s campaign office in Daegu on Sunday, Reps. Yoo Sung-kull, Kwon Eun-hee and Yoo, who left the Saenuri Party, hold a press conference to publicize their running in the April 13 general election as independents. [GONG JEONG-SIK]

The ruling party vowed on Monday to punish any member who supports candidates who left the party to run as independents in next month’s general election.

The Saenuri Party sent official notices to its 17 metropolitan city and provincial chapters nationwide on Monday warning that elected party officials will be punished if they support candidates who abandoned the party. The move was aimed at an alliance of independent candidates who failed to win Saenuri nominations because of troubled histories with President Park Geun-hye.

“We learned of moves in some areas to support independent candidates,” Hwang Gyu-pil, organization bureau director of the Saenuri Party, told the JoongAng Ilbo. “In order to prevent an act against the party’s interest, we needed to clearly deliver a message about the central party’s intention.”

The party said punishments will be levied on local government heads and city, county and district legislators if they show up at stump events or visit campaign offices of independent candidates. Warnings, suspensions of membership and expulsions were listed as possible punishments. The ruling party was hit with a serious schism during the candidate nomination process, as people considered not loyal enough to President Park were squeezed out of nominations, while her allies were awarded tickets.

A group of sitting lawmakers including Rep. Yoo Seong-min quit the Saenuri Party last week to run independently. Yoo, who became an icon of resistance against the president after he was forced to resign from the floor leadership last year following a confrontation with Park, is moving to create an alliance. Reps. Yoo Sung-kull and Kwon Eun-hee, who also abandoned the party after failing to win nominations, joined his campaign meeting on Sunday in Daegu.

Ahead of the meeting, the three lawmakers attended an Easter service at the Daegu Baseball Stadium. Rep. Kim Sang-hoon, another Yoo Seong-min associate, and Rep. Joo Ho-young, an independent who left the Saenuri Party last week, also attended the event.

“In addition to Joo, I will work with other independent candidates outside Daegu such as Rep. Cho Hae-jin,” Yoo said.

On Monday, Yoo’s initiative appeared to spread to the capital region. Yim Tae-hee, former presidential chief of staff in the Lee Myung-bak administration, met with Kang Seung-kyu, a former lawmaker, to discuss an alliance. Yim is running in the Bundang B District of Seongnam and Kang is running in Mapo A District as independents.

“Independent candidates must never be allowed to return to the party,” said Rep. Cho Won-jin, a candidate for Daegu’s Dalseo C District. “We also need to figure out if the independents’ alliance has a legitimate justification.”