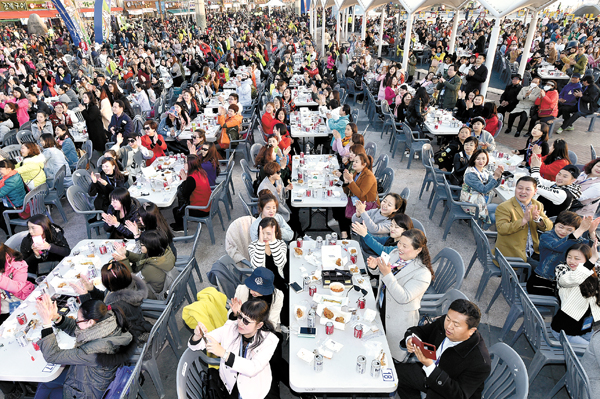 Employees of the Guangzhou-based cosmetics company Aurance enjoy a festive evening of chicken and beer at Incheon’s Wolmido on Monday, part of a week-long incentive tour. Some 5,400 workers flew in, making it the largest tour group to ever land at Incheon International Airport. [OH SANG-MIN]

INCHEON - An overpowering smell of freshly fried chicken filled the air on Incheon’s Wolmido as thousands of Chinese tourists gathered Monday for a taste of Korea’s most popular snack combination, chimaek, or chicken and maekju (beer).

A group of some 4,500 Chinese nationals were on their second day of a week-long incentive tour around Incheon, the third-largest city in Korea, which last weekend started welcoming the largest tour group to ever land at Incheon International Airport.

Employees of the Guangzhou-based cosmetics company Aurance have been arriving since Saturday, and the last group was set to come this morning, bringing the total to 5,400.

“It tastes better than Chinese chicken!” exclaimed Wuchen Bingjie, 24. “I feel like actress Jun Ji-hyun,” she added, referencing a scene from “My Love from the Star” (2013-14) in which the Korean actress takes a bite of chicken and sips beer after delivering the line, “Fried chicken and beer are perfect for a snowy day.”

The series was a huge hit in China and led to a chimaek craze there.

For a city with a population of 2.9 million, the biggest after Seoul and Busan, the incentive tour from China has already served as a model for how to attract more tourist dollars.

Statistics show that a little over one million foreigners visit Incheon each year, mostly from China and Japan. Incheon Mayor Yoo Jeong-bok, a former minister of the interior, explained his plans in a recent interview with the JoongAng Ilbo to increase that influx. Improving links to other Korean cities is one way.

“Over the past decade, Incheon has become home to 13 different branches of international organizations, including the Green Climate Fund headquarters,” Yoo said. If a new KTX railway currently under negotiation receives a green light from the central government, it would only take two hours from Incheon to Busan, and even less to Daegu and Gwangju, he added.

Touting Incheon’s 168 islands, Lim Kyu-tack, manager of the city’s MICE (meetings, incentives, conferencing and exhibitions) industry division, said that officials are planning to devise new package tours hopping from one island to another, an idea recently introduced by Yoo.

For the Aurance group, Lim and his colleagues in the MICE industry division worked over 12 hours a day, seven days a week for two whole months preparing for the employees’ arrival.

Safety was a priority, stressed Lim, chiefly because they had to escort thousands of Chinese tourists through the city, mostly females in theirs 20s and 30s. Incheon has seen tours in the past of a few hundred people, a thousand at the most.

“Having to transfer these people by 140 different buses, traffic safety inevitably became a big anxiety,” Lim said. Some 200 to 300 police officers have been tasked with road control during the Chinese visit.

Incheon officials, tour guides and workers at Songdo Convensia made extra time earlier this month to receive safety education from a nearby fire station. An ambulance has shadowed the group wherever it went.

While Aurance hasn’t made any public statements to local media about its incentive tour, Lim explained that the Incheon Metropolitan Government reached out to the company after hearing from the Korea Tourism Organization that a Chinese company wanted to visit Korea.

Why did the company end up choosing Incheon?

“We’re close to the airport, so accessibility is one thing,” Lim said, “and the Songdo Convensia is large enough to host their annual convention, with no thick columns blocking anyone’s views of the podium.”

For an unforgettable experience in Korea, the city has enlisted “Gangnam Style” rapper Psy and K-pop singer Chae Yeon, both widely known in China, to belt out some of their hit songs at the convention Wednesday night, according to Lim.

For Liu Xiaoshan of Hefei in Anhui province, who works in sales for Aurance, it remains to be seen whether a glimpse of Psy will in any way assuage her desire to meet Korean heartthrob Song Joong-ki, the lead in the current KBS hit drama “Descendants of the Sun.”

While touring Incheon’s Cheondo Rock on Sunday afternoon, one of the locations used in “My Love from the Star,” the 30-year-old was enthused about fulfilling two wishes during her first visit to Korea: shopping and meeting Song.

“I’ve seen the drama ‘My Love from the Star,’ but it’s been a while since it was aired in China, so I can’t feel much of anything right now,” Liu confessed behind her polarized sunglasses. “I’m more into Song Joong-ki nowadays. Everyone wants to marry him.”

As for shopping, the Aurance worker was quick to explain her affection for Korean cosmetics.

“I’ve heard they’re really good for your skin,” she mentioned.

Before returning to China, the group will make a final stop at a local duty-free shop. All in all, Incheon expects their trip to inject 12 billion won ($10 million) into the local economy.