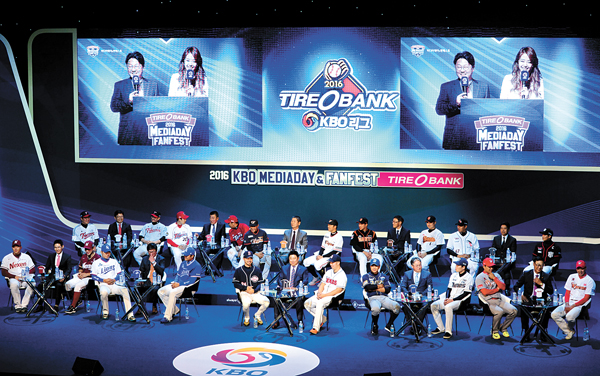 Managers and players from the Korea Baseball Organization (KBO) listen at the KBO’s annual press conference on Monday. [NEWSIS]

As the regular season approaches, the Korea Baseball Organization (KBO) held a press conference on Monday to give managers and players a chance to ask questions and make predictions about the forthcoming season.

When asked which teams were most likely to make it to the postseason, most managers picked the defending champ Doosan Bears and the Samsung Lions, which placed first in the regular season last year. Some managers also picked the NC Dinos and Hanwha Eagles, which have bolstered their roster with free agents.

“I think the Bears, the Lions and the Dinos can be matched in terms of strength,” said Kim Tae-hyeong, the manager of the Bears. “The Dinos has strengthened its batting lineup with Park Seok-min,” added the Lions manager Ryu Joong-Il. Park joined the Dinos as a free agent, inking a 9.6 billion won ($8.2 million) deal with incentives for four years. He demonstrated during the preseason that he’s worth the every penny. Playing in the 16 games, Park collected .429 batting average, or 18-for-51, three home runs and 11 runs batted in.

The Eagles, who finished eighth last season, were also picked as possible postseason candidates. After a poor showing last season, the team has brought in finisher Jung Woo-ram from the SK Wyverns and reliever Shim Soo-chang from the Nexen Heroes.

“Once a season ends, there are some disparities in the level of preparation for the next season among the teams,” commented the Wyverns manager Kim Yong-hee. “It seems like the Eagles are among the teams that have equipped themselves well.”

In response to the comments made by other managers, the Eagles manager Kim Sung-keun replied, “I sat in the back during the press conference for two years, which is where the managers of the teams that placed in the lower half in the standing sit. I think some of the us in the back might move up to the front next year.”

When the question was asked, two teams were notably absent: the Heroes and the KT Wiz. The Heroes have been a dynamo in the Korean baseball, making appearances in the postseason for the past three years. But the Heroes lineup has thinned. Park Byung-ho, the former Home Run Title winner who had over 50 homers for two straight years from 2014 to 2015, has joined the Minnesota Twins in Major League Baseball (MLB), representing a major loss for the team. Other key players such as slugger Yoo Han-joon and closer Son Seung-lak also found new homes as free agents. Cho Sang-woo, whom manager Yeom hoped to be his starting pitcher, is out for good this season due to surgery on his right elbow, further troubling the team.

“It is agitating to keep hearing about us likely being at the bottom this year,” said Yeom. “But, I believe in our team that we will make it to the postseason.” Finding new home at the state-of-the-art Gocheok Sky Dome, the Heroes hope to be able to take advantage of the facility.

The Wiz, which finished last in the previous season after moving up from the second division, quelled criticism that the team lacks capabilities to compete in the top league by placing second in the preseason. However, the managers of some other teams argued it has yet to transform into postseason material.

“We will do our best to escape the last position,” said manager Cho Beom-hyeon in response.